Software application development can be accelerated.

More specifically, software acceleration technologies exist to pump extra optimisation and performance out of existing tools — although in this category we often primarily talk about GPU-based acceleration, it has to be said. 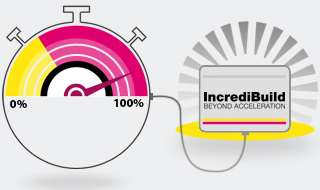 The immodestly titled IncrediBuild is a provider of software development acceleration technology.

It’s tool for Linux and Android is described as a suite of of out-of-the-box acceleration solutions enabling developers to accelerate their software development up to 30x faster.

“IncrediBuild for Linux and Android also allows developers to visualise their build process with no vendor lock-in or need to change their development toolchain or workflow,” says the firm.

What it ACTUALLY does

Essentially this software is supposed to save time usually spent waiting for build, testing, packaging(or other development processes) as part of the Continuous Integration and Continuous Delivery process.

This type of software is hoped to streamline development cycles by running development processes in a distributed fashion — that’s what the firm really means by software acceleration.

IncrediBuild uses a ‘Docker-like’ proprietary distributed container technology to enable fast processing of development tasks in parallel, allowing developers to turn their computer into a virtual supercomputer by harnessing idle cores from remote machines across the network and in the cloud, increasing performance, speeding build time, and improving developer productivity.

IncrediBuild for Linux and Android supports the most popular Linux distributions, such as Ubuntu, Red Hat Enterprise Linux, and CentOS.

It can accelerate most built tools and various development tools without any integration, changes to source code, or build tools environment.

“Being able to directly visually audit the build process to look for bottlenecks while reducing execution time with IncrediBuild significantly speeds up our ability to deliver innovative solutions to customers,” said Richard Trotter, DevOps support engineer at GeoTeric.

IncrediBuild allow a developer to record and replay the entire build process execution and provide an intuitive real time monitoring to build execution in a very easy to use graphical representation providing statistics and reporting.

It allows a developer to drill into low-level data as well as monitor their build health, identify and detect key errors and detect build dependencies, anomalies, and inefficiencies. It is the only solution that provides a centralised area to inspect previous builds, replay and analyse them.

This helps enable and optimise Continues Delivery as well as aid regulatory compliance. Until now the only way Linux developers could analyse what was going on as they compiled their software was to rely on the command line and long textual output.