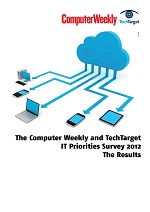 North America is more bullish than the UK which is taking a
more conservative approach to IT spending.

For more IT priorities, download a copy of the research report here.