With this May Microsoft Patch Tuesday Security Update, we see a relatively light release with just two security updates this month. Both patches are rated as Critical, with the potential for remote code execution on the target client. Unfortunately, all patches released this month will most likely require a reboot of the target system.

Based on the results of our AOK Application Compatibility Lab only one patch will have a minor impact on a standard application portfolio; MS010-031 Vulnerability in Microsoft Visual Basic for Applications Could Allow Remote Code Execution.  We have included a brief snap-shot of some of the results from our AOK Software that demonstrates some of the potential impacts on the OSP application package with the following snap-shot image. 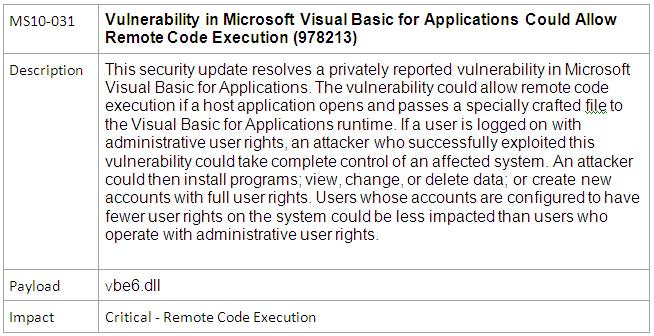 *All results are based on an AOK Application Compatibility Lab’s test portfolio of c.2,000 applications.