Who knew that January could be so interesting?

We have EMC to thank, courtesy of its ‘Record Breaking’ launch. In case you missed it, here’s our preview and here’s news that one of the new VNX products won’t be sold in your author’s backyard.

Blogosphere reaction was both predictable and unpredictable. EMC of course came out and said, through posts like this one from Chuck Hollis, that everything the company launched was a revolution.

Competitors,like HDS’ Christophe Bertrand and Hu Yoshida, NetApp’s Exposed and Missing Shade of Blue found reasons to criticise the launch. Hpar’s Marc Farley declared the launch “inane” and competitors’ employee/reseller blogs did their duty, as shown in this StorageNerve post or this one from John Martin at NetApp Australia.

A few others felt the launch a bit silly, such as Drunken Data who was one of a few to whom EMC sent a shattered vinyl record (broken record, get it?!!) in the mail.

FWIW, your editor received no such broken records, was invited to a launch event in Singapore which I could not attend and had a nice chat with a local EMCer about the launch. Nothing record-breaking there.

Here, also for what it is worth, is Drunken Data’s response to his broken record:

The consensus is that the launch did involve a lot of hype, and that the “41 products in a single day” spiel was hype, especially given that nearly all of them regarding VMAX had been announced or at least pre-announced in the past.

But there is interest in the new VNXe, which Chuck Hollis wrote up by evoking some deep Data General history.

Others also like the VNXe, such as Techhead, Information Playground and Storage Architect. Virtual Geek really likes it. There’s a surprisingly small amount of comment on the new Data Domain boxen, other than from The Backup Blog.

Our take? Well ... VNXe looks interesting, VNX looks promising but overall it seems odd when a company that has staked its name on information management makes a big launch all about speed.

What led me to that conclusion? Well, when I cleaned out my desk the other day (My home office has moved to another room) I found this tin, which conceals a tangram puzzle: 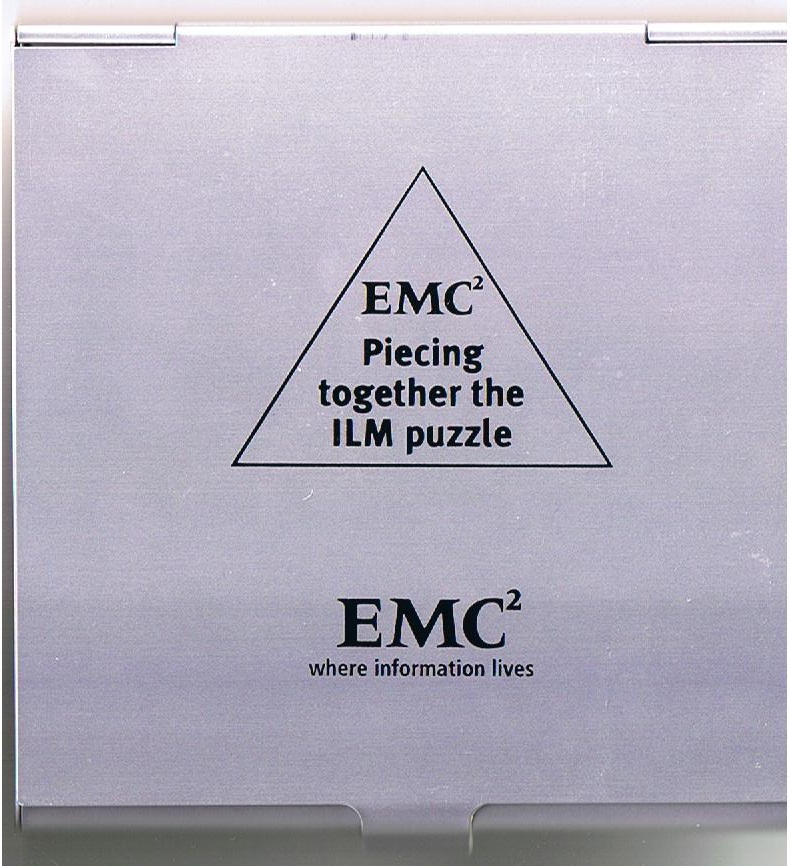 I’m not sure how old it is, but I’m betting at least three years and believe it is a year or three older. EMC hardly mentions ILM these days. Tiering is the jargon du jour. Yet even the new version of FAST seems to be a little short of the ILM vision EMC’s been talking up for years. But marketing would never get ahead of reality, would it ...

Something else your editor found over the southern summer is this piece from the Fiji Sun:

For those of you who don’t follow South Pacific politics, Fiji is currently governed by its military and freedom of the press is far from complete. Local newspapers, I found during a lovely vacation, veer between careful sycophancy, nationalism and bulk cut-and-paste.

I presume the story above, which breaks from a story about consumer technology trends into recaps of Storage Switzerland on FCoE, is a result of the latter. Either that or a wire feed got badly borked, or maybe the Fiji government has an unusual interest in data centre networking.

While we’re on FCoE, there’s been reaction to Intel’s new version of it that we wrote up here. RayOnStorage says it is important. StoraegBod blogged about it, too.

Elsewhere, Preston de Guise has been playing with Data Domain Boost and William Vanbenepe is taking a (look at) REST and other cloud APIs. ZeroWait officially announces it is open for business in Australasia. David Chappell asks what on earth is PaaS? IDEAS International looks at server innovations.

Lastly, NetApp’s Virtual Storage Guy notes NetApp is now the 5th best place to work in the USA. We’re pretty sure that’s a fall, although 5th is still pretty good.