<< Read the second part of this Windows Azure tutorial

This is the third article in our Windows Azure guide series, aimed at helping you understand the intricacies of Microsoft’s Windows Azure cloud platform. Subsequent to the Spring Update released in June 2012, the Windows Azure landscape has additional features available on preview, as shown in Figure 1. 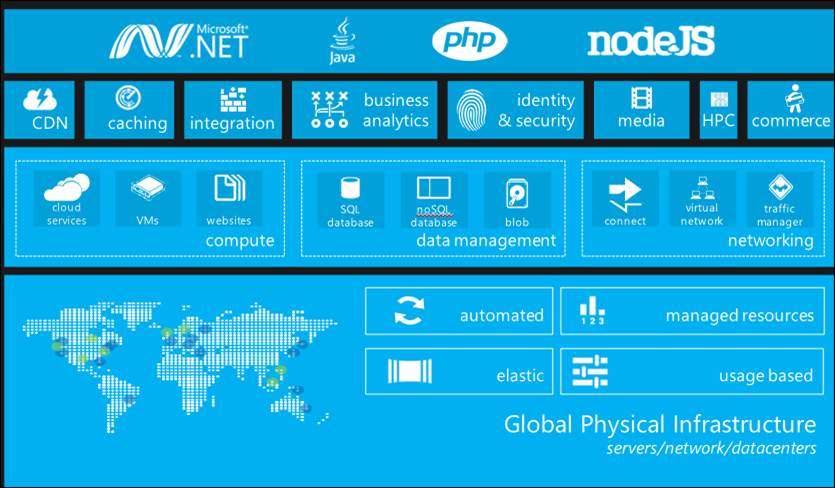 The Platform as a Service(PaaS) offering of the Windows Azure platform has been rebranded as “Cloud Services”, and enhanced with the latest version of the SDK – 1.7 (download link here). This installment of our Windows Azure learning series focuses on the use of local storage in the Azure Cloud Services. Other salient features and new additions will be discussed in subsequent installments.

Designing and architecting an application for Cloud Services involves making it easily scalable and highly distributed. Accordingly, the data tier can be one of the following:

Local storage is the fastest storage access and very similar to standard file I/O operations (such as .NET’s System.IO.FileStream). This is the storage available in the local drives of the virtual machines wherein the application is deployed. Each of the virtual machines has virtual hard drives (VHDs) connected to them where subdirectories associated with the VHDs can be accessed. The maximum amounts of local storage that can be consumed on VMs are as follows:

No Windows Azure tutorial will be complete without the key highlights that need to be taken note of when assigning a local storage (say “foo”) to an Azure “Web Role”:

Configuring local storage in an application

Here is a step-by-step Windows Azure guide to configuring local storage in an application:

a) Manual: In the service definition File, you can manually add any number of local storage virtual names under “local resources” as shown in Figure 2.

b) Wizard:  In the properties pane of the “Web/Worker” role, there is a section called local resources that can be used to configure local storage as shown in Figure 3.

Part 1.Explains how to set up end user access to the Windows Azure Platform

Part 2. Discusses scaling of applications to increase or decrease the number of VMs

In terms of APIs for .NET developers, the Web or Worker Role’s base class is the “RoleEnvironment”, which has a method called “GetLocalResource”, returning a reference to a named “LocalResource” object that represents a directory. Hence we can read or write to it using standard .NET I/O classes. LocalResource.RootPath will return the full path of the local storage.

The code snippet shown in Figure 4 uses the above classes and methods to access the local storage that was defined earlier to do some file write and read operations. The output will be a label (localStorelbl) with the contents specified. Similar methods are available for Java and PHP developers as well.

Another example that demonstrates a File Upload that is saved into the local storage is shown in Figure 5. 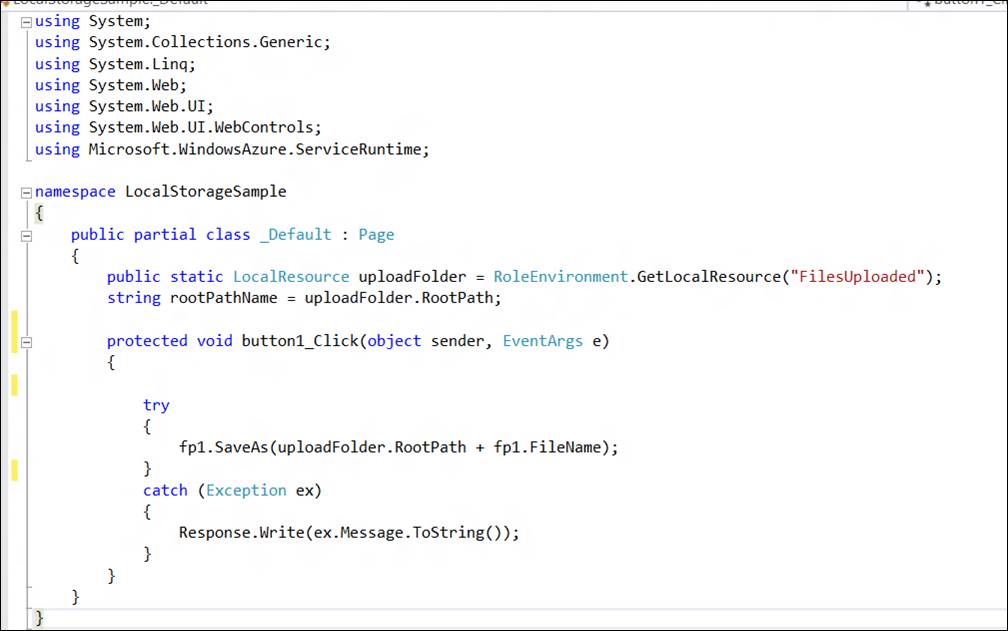 In conclusion of our Windows Azure guide to local storage, we would like to reiterate that local storage stores transient data that can be rapidly accessed and stored on a “per-instance” basis rather than synchronized across all the roles/instances. With the new updates of the spring launch, local storage has been further enhanced to create a “distributed caching” solution as a readily available service that uses local storage from all the instances to create a synchronized high speed cache, which is a free offering.