Oracle’s unique position of supporting both Linux and Unix begs the obvious question as to its position in near future in the Unix versus Linux equation. As far as enterprise requirements are concerned, which operating system will come out tops?  Is Linux the new Unix?

From the Indian perspective, Unix still runs strong in terms of its install-base, according to Gartner’s figures. While many in the industry seem to be comfortable with their existing Unix infrastructure, an equal number is concerned over whether this is the correct strategy. The main question being asked in this context is whether Linux can replace Unix in mission critical applications. 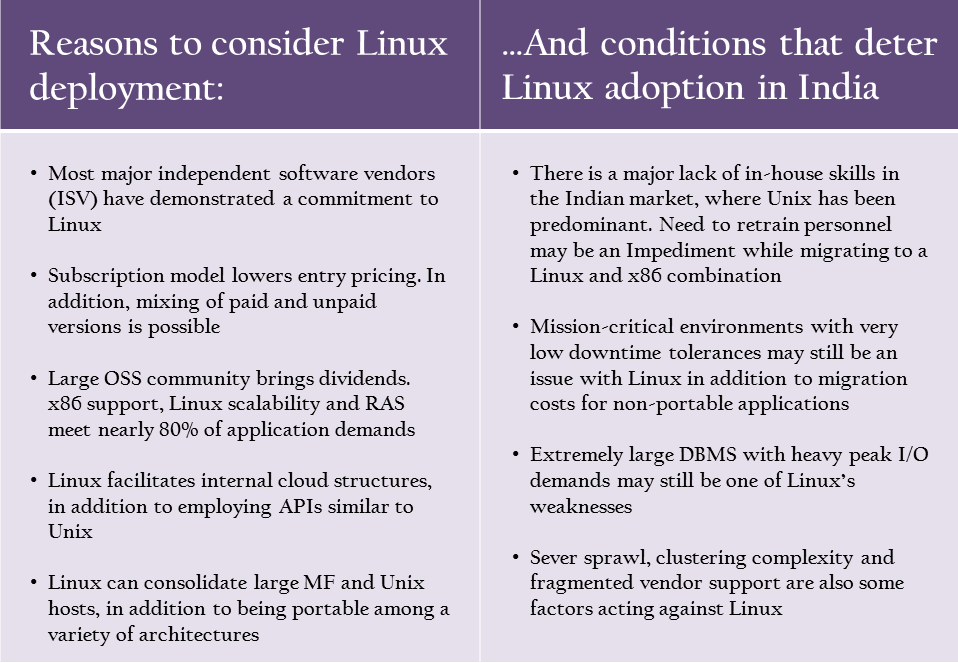 Gartner’s 2011 ERP OS market trending report shows Linux implementations to be rising sharply, while Unix is on the decline. This trend is driven by the advent of Linux development platforms for SAP and Oracle, coupled with Linux’s RAS and performance benefits provided by x86 architecture. Linux’s global market share grew from 10% in 2005 to nearly 33% in 2011, while Unix has shrunk to 14% in 2011 (from 45% in 2005).

Looking at server momentum trending for ERP OLTP DBMS setups, Linux is gaining ground. While market share for the Oracle/Unix combination has dropped from 45% in 2005 to 25% in 2011, market share for the Oracle/Linux combination has risen from 5% in 2005 to 24% in 2011. This phenomenon is again driven by x86 performance and RAS. The prevailing tension between SAP and Oracle further fuels this switch.

Given this context, Gartner’s recommendations for Indian enterprises looking at procuring/refreshing server infrastructure are:

Given Linux’s gains, Gartner recommends that ERP application deployments be driven toward Linux and Windows, as Unix and other platforms are believed to be moving into niche segments. Gartner predicts that by 2014, 30% of current applications running on proprietary Unix will migrate to open source software (OSS)-based Linux operating systems that run on x86 based commodity hardware platforms. It’s best to catch up while there is still time.

This Unix to Linux migration tip is based on the excerpt of a talk presented at the Gartner IT infrastructure operations & data center summit 2012 in Mumbai by Naveen Mishra, principal research analyst, Gartner.