The designers of Synology’s DiskStation DS1511+, a small business network-attached storage (NAS) device, have clearly never been told about the importance of first impressions. Had they been weaned on the old story about second chances and first impressions, there are a number of things you’d imagine they would have done differently in order to ensure users of this otherwise excellent device don’t spend their first few minutes in front of it feeling flummoxed and nervous.

The source of the first poor impression is the mechanism the NAS offers to eject its five disk trays, as this is confusing and counter-intuitive. A small switch on each disk case must be flipped before springs can eject the case. It takes a while to get used to and that’s not something we’ve ever had to say about a small NAS.

The second poor impression is the choice of material for the trays, as the black plastic used bends a small but disconcerting amount as you screw a disk. The material is also disconcerting given that most small NAS units we’ve encountered have metal disk trays. We’ve no idea just what polymer Synology has chosen or if it possesses special qualities that make it suited to the task, but its presence immediately had us wondering how the device would fare after a few years of use and if it would, in the event of a crack or thermal damage, even be possible to buy replacements.

At least Synology included two bags of disk screws – for both 3.5 and 2.5 inch drives – which felt thoughtful until we noted there were not enough screws to use all six holes on the larger drives.

The next annoyance was an installation CD that was just plain confusing as it offers the chance to run or install the same NAS management utility from the same menu. The installation utility offers a Wizard that asks questions about things aren’t explained in the quick start guide and, because the installation CD does not say you’ll need to open the PDF manual it contains, we quickly felt confused.

For example, the device asks you to find a firmware installation file, but doesn't explain why or what file extension to look for. Later, it insisted we create a “shared disk”, Synology-speak for naming a volume on the NAS. At this point, to be blunt, we felt that perhaps this was a cheap and nasty unit as we had scratched our head trying to figure this out with little assistance from the instructions or installation disk. Things improved after a few more clicks as the installation wizard progressed – RAID setup was a snap (we chose RAID 5, but could also have picked 0,1,6, 5+1, JBOPD or made the device an iSCSI target) – and the web-based GUI revealed itself our nascent opinion improved sharply.

But this process quickly saw us offered the administrator’s login and – you guessed it – the password was not made readily apparent. Back we went to the PDF, where we learned that you’ll want to change username and password within about eight seconds of turning this unit on as both are utterly predictable. 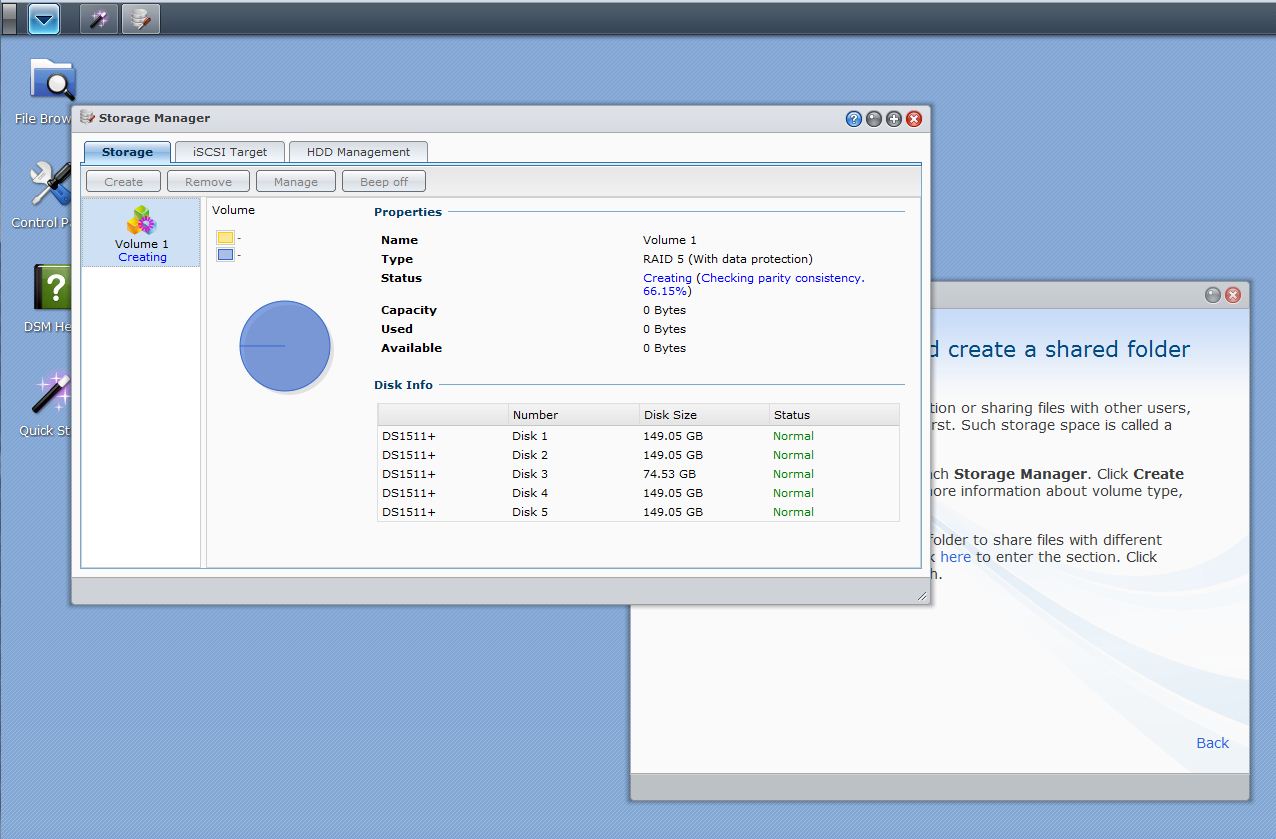 The DS1511+'s interface. Click on the image to see a larger image.

Synology’s software lets you mount the disk to the Windows desktop and this went off without a hitch on our main test machine. But a second machine, running Windows XP, was not welcomed by the NAS. Several mounting attempts resulted in default passwords being rejected. Eventually, for no apparent reason, the device connected. We’ve no idea why, but it was another frustration that did not raise confidence in the device.

But by now we were enjoying the GUI, which revealed functions scarcely hinted at in the first pages of the manual. These include the usual multimedia servers that many small NAS offer, but also a mail server, web server (including HTTPS!) and MySQL server. There’s also a remote replication utility and, thanks to a second Ethernet port and a pair of USB slots, the chance to use the device as a printer server. Just in case that’s not enough for you, the device also has a video surveillance server, complete with ability to stream surveillance footage onto the net. A pair of eSATA ports and an accompanying JBOD, the DX510, allow expansion to 15 drives and 45TB of combined storage.

These functions intrigued us, but are a little beyond the remit of this site. So we fired up our trusty Intel NAS Performance Toolkit to test the device’s file storage and serving qualities with the software’s Office Productivity Tests. The test was conducted from a single PC running Windows XP SP2, over a 100MbPs LAN operating on a four-port switch built into an iinet Bob Lite ADSL2+ modem/router/switch that was also connected to another PC, a network printer and several WiFi devices.

The device’s headline speed was 11.852MB/s, a little better than the Cisco 324 Smart Storage box we tested last year, and a smidgen speedier than NetGear’s ReadyNAS NVX (which matches it for VMware readiness).

Those speeds make the device a little faster than the Cisco product for writes and opens, and a little slower than NetGear’s box for reads but substantially faster for opens.

Overall, the DS1511+ is intriguing. It appears to be an entirely competent and sometimes slick NAS, albeit a slightly quirky one that requires patience during setup. But once you get over the awkwardness (the device responds with heart-stopping slowness when you press its On button), the device presents as a very manageable and powerful machine with an awful lot of features.

As with most small, sub-$1000 NAS devices (the DS1511+ can be found online from $AUD900) this machine is almost certainly intended for use in smaller businesses. We imagine (with reservations about plastic disk trays) that the device could serve them well, thanks to its rich GUI and long list of useful functions that make it a cheaper proposition than a small business server.

Yet while the DS1511+ is undoubtedly impressive, it’s somehow hard to imagine the device getting a lot of traction. Longtime storage observers will remember devices like the Yellow Machine, a multifuntion NAS and more that was lauded but whose vendor, Anthology Solutions, went under in 2007. SearchStorage ANZ has been quoted very low sales expectations for rival small NAS – under 1000 units a year – so no matter how impressive this device is we are left wondering just how many organisations will press its numerous features into service.