Adam Gerrard is an experienced CIO who has worked across various businesses and sectors. In July 2014 he took up his latest challenge, becoming CIO for parcel delivery specialist Yodel. So, how’s it going?

“It’s different to anything I’ve done before,” says Gerrard, who previously worked as global chief technology officer for Laterooms.com and CIO at Avis Europe. “Yodel is a people-driven business; we need people to serve our clients and their customers. We’re focused on using technology to help our people increase their productivity and to help our customers self-serve.”

Gerrard says a large slice of his first year in situ has involved understanding both his firm’s long-term objectives and its underlying technology base. Yodel was formed by the Home Delivery Network’s acquisition of the UK domestic delivery business of DHL in 2010. The combined business was rebranded as Yodel in May 2010.

The firm has traditionally relied on a large amount of legacy IT. During his first year as CIO, Gerrard set in place a mechanism to deal with outmoded systems, while also creating a platform for digitally enabled change. His transformative work has already helped produce a 20% reduction in the IT cost base at Yodel.

Gerrard says this cut has been achieved by easing back on new IT staff employed and reducing the amount of change initiatives taking place. "That doesn’t mean we've stopped innovating,” he says, suggesting the approach has focused on spending money on areas that can make a difference in terms of productivity and knowledge.

“My role at Yodel is about leading a business transformation through IT. We face a big challenge in terms of legacy systems. Some of the technology, such as Informix and Uniface, is really quite obscure. I want to deal with those systems. But I haven’t got time to only focus on legacy technology," he says.

"While I want to make sure back-end platforms are updated, I’m also here to make sure that those changes take place in unison with the digital enablement of front-end services.”

Moving from a legacy platform to digital technology

Gerrard points to Yodel’s recent introduction of business intelligence software from Teradata. “With the firm using so many legacy systems, it’s really important to provide an overview of business information and to try and create one version of the truth. It’s absolutely crucial that we invest in core areas,” he says.

The Teradata project began in the summer of 2014 and was fully operational before Yodel’s peak period in the run up to Christmas. The data-driven project has simplified reporting processes across the organisation. The firm now uses just three dashboards, helping executives across the business to make smarter decisions through real-time data.

Digital enablement is not just confined to business intelligence. Gerrard points to his firm’s use of the social media tool Yammer. As well as helping to improve internal communications, he says the technology has been used to reach out to individuals who might otherwise feel disconnected.

In addition to its permanent delivery staff, Yodel makes use of a broad range of third-party suppliers and neighbourhood couriers who deliver within their own postcodes. Gerrard and his team have given these self-employed and third-party colleagues access to Yammer. He says the approach helps ensure as much information as possible reaches all its customer-facing workforce.

“It has opened up new opportunities,” says Gerrard. For example, the service centre uses Yammer to provide updates in key areas, such as logistics and travel news. “It’s about giving as much information as possible to all our drivers to make them more productive.”

Progress in key areas, therefore, has already been made. Gerrard says his aims for 12 months from now are threefold – first, to have helped create a stronger digital presence for the organisation; second, to have continued to cut the IT cost base and to continue serving the whole of the business; and, finally, to have helped maintain quicker routes to change across the business.

“If it’s required, I want the IT team to be able to support the rest of organisation as it attempts to approach the market differently,” he says. Gerrard is unable to go into detail about what some of those approaches might entail, but he says technology will play a crucial role in some potentially “game-changing” ideas. He says the IT-led initiatives could have a huge impact for Yodel in terms of a competitive advantage over its rivals.

Work on these secret projects is already well underway. The firm has created an IT innovation lab, where a small number of dedicated individuals scan the technology market and search for potentially valuable opportunities. “These people are working on various projects,” says Gerrard. “Some are with traditional vendors, while others are with niche specialists.”

Tapping into a broad range of innovative partners has become a significant part of the day job for leading CIOs, such as Gerrard. “The pace of change in IT has increased tremendously,” he says. “No one, not even the CIO, can afford to work in isolation. You need to spend your time engaging with people around the business. And you need to surround yourself with great people inside the IT department.”

Some IT leaders would be reticent about hiring people who are too strong, particularly those whose skills could expose some of the CIO’s own weak points, yet Gerrard dismisses such concerns. “Rather than panicking about being replaced, CIOs should think pragmatically about what the business actually needs,” he says, before outlining how IT leaders can ensure they excel as a respected executive.

“Stay on the front foot and engage with other executives around the business,” says Gerrard. “There’s a school of thought that suggests a CIO can either engage or focus on day-to-day operational concerns. If you only concentrate on the latter, you’re a traditional IT director and not a real CIO.”

Gartner suggests internally focused individuals are better seen as chief operating officers of the IT department. The analyst firm believes such individuals serve a useful purpose, but they should report to an outward-facing CIO. It is a sentiment that chimes with Gerrard.

“Great CIOs manage information rather than technology,” he says. “IT is much more than tin and hardware. It’s about user experience, risk mitigation, value creation and helping the rest of the business to make the right decisions.”

Understanding the future role of the CIO

Gerrard had time to reflect on the changing role of the IT leader during a 12-month career break through 2013 and 2014. “I was given a specific role at Laterooms.com. My job was to go in, move the organisation towards a service-oriented platform and to increase the speed of change,” he says. After successfully completing his transformation project at Laterooms.com, Gerrard spent time in Greece and Germany, before returning to UK. He started at Yodel in July 2014.

“I’ve always tried to take interesting roles in innovative businesses,” says Gerrard, who has previously held senior IT positions at car hire specialist Avis and holiday firm Thomas Cook. “My aim isn’t to enter a new business and invent a new approach to IT. I like to re-use elements from the other sectors I’ve worked in within each new position. Such re-use is a great proof point in regards to your approach to IT management and how it can be used across different sectors.” 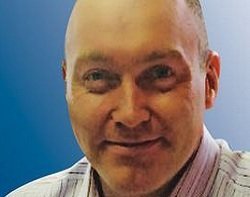 He says strong relationships are an important success factor for the modern CIO, but engagement is absolutely crucial in his current role. “As I said before, Yodel is a proper people business,” says Gerrard. “Our success is directly related to how we maintain personal contact with our clients and their customers. I’ve had to make sure that is core to my approach and I focus on how the business can use IT to make a difference to the quality of those relationships.”

Gerrard says IT, when compared with other senior positions, has a very different relationship with the upper echelons of business management. He says finance directors have multiple responsibilities, such as accounting and funding, as well as mergers and acquisitions, just like a CIO is in charge of IT operations, innovation and front-end services.

But while no one ever states a business might need three or four CFOs, experts regularly claim IT leadership in firms would be better served by splitting the CIO role across several positions, such as chief digital officer, chief operating officer of IT and transformation director.

It is an anomaly that Gerrard finds perplexing. All CIOs can do, he says, is focus on what they do best – and that will often mean developing a team with a broad base of skills. “They need breadth,” Gerrard says of the key to success for modern CIOs. “They need to be able to lead functions and they need to build a strong team that includes a wide amount of expertise.”

The demand for IT innovation from the business will mean CIOs need to rely on assistance from talented specialists in their own department. Gerrard says time-poor IT leaders should look for experts in key areas, such as infrastructure, cloud and integration. Technology chiefs should then have more time to help the rest of the business to make the most of new systems and services.

“CIOs need to give a steer to the business and provide positive feedback on their ideas,” he says. “It’s all about taking inspiration and helping to feed IT innovation into the business roadmap.”