The cost of the government setting up a new IT system for child maintenance has risen again – to £352m.

A report by the National Audit Office (NAO) now says the Department for Work and Pensions (DWP) is estimating the lifetime cost of designing, building and testing of IT systems for the service at £352m – including £44m for future IT development.

The NAO said programme costs have spiralled because of higher IT costs and time extensions.

The DWP expects the total cost of the programme to reach £950m – £70m more than it estimated in 2012. The rising costs come from delays, extra testing and the use of a pilot testing approach.

The NAO report said: “The department went live without completing full testing of the systems and has experienced minor service disruptions. An internal audit report in early 2014 concluded that IT systems were not yet stable.”

It suggested that the department should complete testing of the new systems, or fully assess the future risks of proceeding without full testing.

Delays to the project have so far cost £39m in testing and technical support for staff. Delays in setting up a data warehouse to automate the closing of child maintenance cases have cost a further £4m. 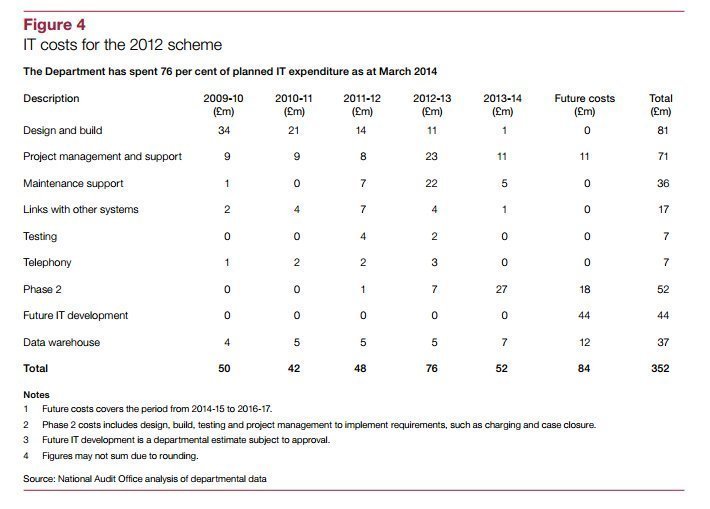 The DWP is planning to close 800,000 legacy child maintenance cases at a cost of £370m, but will not be able to close more complex cases without the data warehouse, which is several months behind schedule. The department is relying on its legacy IT systems in the short term, but these cannot prioritise cases for closure.

The government created the Child Support Agency (CSA) in 1993 as an alternative to child maintenance claims being pursued through the courts.

The 2012 Child Maintenance Service was introduced to replace the existing legacy schemes, which were struggling with IT problems, leading to poor customer service and incomplete information about outstanding child maintenance debt.

The legacy CSA computer systems became notoriously defective, causing some cases to disappear from the records. A second database was built to address this problem, but data migration issues led to a third database being developed, which now involves staff handling process claims.

The government had hoped that the 2012 scheme would ensure that more parents pay the child maintenance they owe in full and on time. The DWP still hopes to save £220m a year by reducing the number of applications to the scheme and by charging parents for its services.

The 2012 scheme was intended to have two phases: the introduction of a new IT system in December 2012, and the DWP beginning to charge parents for the service in June 2014.