SAS has opened a research and development (R&D) centre in Glasgow, focused on combatting fraud and financial crimes.

The Scottish centre joins other SAS global R&D centres, including its R&D division headquartered in the US.

The firm has enjoyed Scottish government support, including a Scottish Development International (SDI) grant of £1.29m, announced in 2013.

“SAS is proud to be building on its existing operations in Scotland," said Hagstrom. "We initially established a global research and development team to create business applications to help modernise law enforcement, improve public safety and enhance national security. The initial investments allowed SAS to see the real Scottish potential with easy access to Europe, the excellent pool of talent from universities and its strong culture of innovation.

“There is a lot of talk about big data, but not so many examples of companies capitalising on it,” he said. "But you are starting to see early examples, such as, here in Scotland, how banks are making liquidity more easily accessible for small and medium businesses so they can grow. That has come on the back of big data analytics. And Nationwide has reduced its losses from fraud by 75%.

“There is also a sleeping giant in services. In Scotland, while 80-85% of GDP is in services, only 15-18% is in exports. Analytics can change those numbers. A retailer that knows a bit more about a client can make an incremental difference in its services revenue.”

Hagstrom said the Scottish university system has a strong computer science tradition, and that SAS wants to advance its collaboration with the sector in the development of applied analytics courses that will be inter-disciplinary. The company already works with 80 UK universities – its total investment, it said, comes to £90m over 15 years, and it has trained 2,500 students in SAS software.

Jim Goodnight, SAS’s chief executive and founder, said it was a goal for the company to see more and more students graduating from universities who understand SAS, rather than just using open source statistical software language R.

"R is not something that you can run, say, a bank on. It does not have the same depth of capabilities that are in SAS. You can’t do data management with it – it is purely in memory,” he said.

Scotland’s first minister, Alex Salmond, said in a statement: “SAS is a prestigious global company and it’s fantastic to see the decision to expand extensively in Scotland come to fruition.

“The new facility will position Scotland as an international centre of excellence for developing solutions to tackle fraud and security and will create a substantial number of highly skilled, high-value jobs – a significant feather in Scotland’s cap".

Anne MacColl, chief executive of Scottish Development International, was present at the centre’s official opening. “Data analytics is an area of significant growth potential and one in which Scotland is well placed to take a leading role as part of the global opportunity that big data represents," she said.

"Scottish Development International is delighted to be able to support SAS in the creation of its R&D centre and we are committed to helping the company realise its growth strategies in Scotland,” added MacColl. 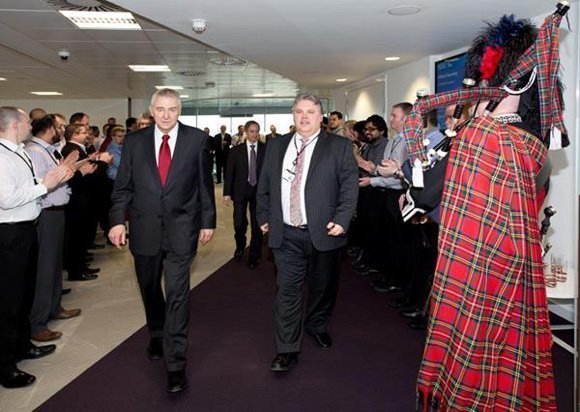