CIOs are turning to technology to help their organisations strengthen the bottom line as they grapple with some of the toughest economic conditions seen for decades.

In a series of interviews with Computer Weekly, IT leaders have revealed how their IT priorities have been shaped by the downturn.

While many IT leaders are cutting costs, others are using the downturn to invest in technology that will help the business grow.

The interviews accompany research by Computer Weekly and TechTarget, which reveals that 29% of UK businesses plan to expand their IT to grow their business despite the tough economic conditions.

The survey had responses from more than 200 UK senior IT professionals, and in excess of 2,600 worldwide.

Windows 7, server virtualisation, business analytics and data protection are at the top of organisations' priority lists this year in the UK, the research reveals. 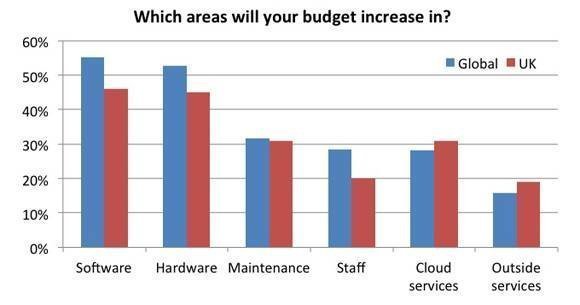 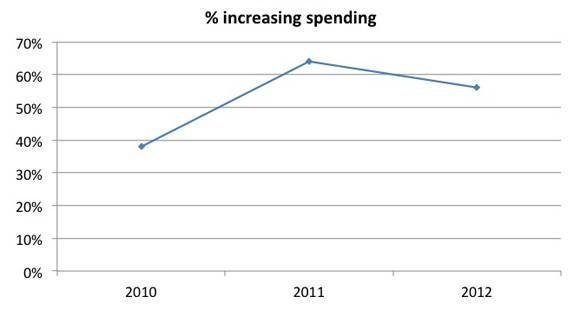 UK IT budgets have been hit unevenly by the downturn, where 38% of organisations expect to spend more on IT this year, while 32% are facing cutbacks.

CIOs in the public sector and charities which rely on government funding and donations from the public are facing the most severe cutbacks in their spending. They are looking to use IT in innovative ways to help their organisations reduce their overheads.

West Midlands Police, which faces phased budget cuts of £126m, is looking to shared IT services and partnerships with suppliers to help run its IT services more efficiently.

“We are looking at key opportunities where ICT can add return on investment and deliver a value proposition to the organisation," says CIO Chris Price.

Children’s charity St Christopher’s has delayed some IT projects, following a cut in its income from local authorities. IT manager Dave Glanville, is concentrating on projects that will bring a quick return, such as server virtualisation.

St Christopher's has become more agile and is focusing on shorter-term projects. “The effect on IT is that we also have to be quick and agile,” he said.

Other organisations are stepping up their spending on technology as they look for ways to boost their turnover during difficult trading conditions.

High street retailer John Lewis, which posted record sales in January, is investing in a state-of-the-art EPOS system, an updated website, and has longer-term plans for data analytics.

“We are increasing our investment in technology and we are recruiting 50 new IT partners,” CIO Paul Coby told Computer Weekly.

Channel 4 is another organisation that is stepping up its IT spending, as it gears up for the paralympics and the launch of the YouView set top box.

Kevin Gallagher, CIO, says that investing in IT will give CH4 a competitive advantage in 2012. “We have an opportunity to get good value because other people will not be investing,” he says. 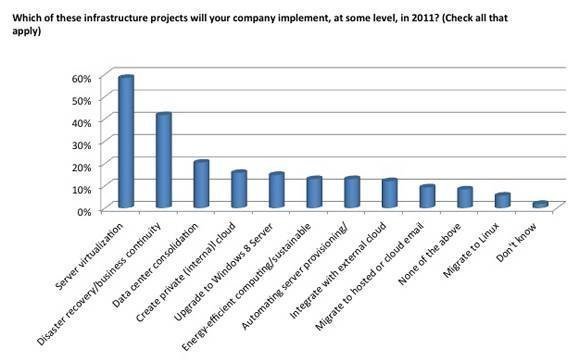 Server virtualisation has been a priority for businesses for the past few years, driven partly by datacentre consolidation.

It offers a way for businesses to cut their infrastructure costs and gain a rapid return on investment.

Nearly 60% of the UK organisations surveyed by Computer Weekly and TechTarget are planning server virtualisation projects this year.

Glanville of St Christopher’s says virtualisation will pay for itself rapidly by reducing energy costs, and will also make software testing easier.

“We want to be able to test stuff in a much more flexible test environment, which virtualisation will give us,” he says.

Virtualisation is key to helping supermarket Sainsbury’s meet its plans to double in size by 2020, without doubling its IT footprint, according to the supermarket's IT director, Rob Fraser.

“With so much we want to do over the next five years, it makes sense to invest in a large virtualisation system. That gives headroom for all sorts of things we haven't even thought about yet," he says. 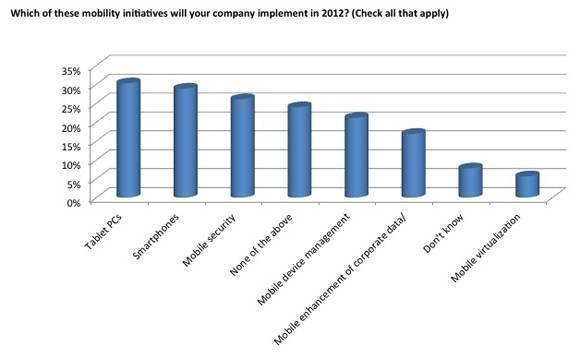 The growing use of consumer devices at work, and the associated bring-your-own-device (BYOD) initiatives, has made mobile computing a priority for organisations this year.

Around 30% of UK IT professionals surveyed by Computer Weekly and TechTarget plan to introduce tablets this year, and a similar proportion are planning smartphone roll-outs.

In the West Midlands Police, CIO Price says mobile devices will help officers to spend more time on the beat and less time on paperwork.

IT leaders discuss their 2012 priorities – read the full interviews here:

When a caller rings in to report a crime, that information could be taken down and sent to the officer visiting the crime scene on a mobile device, he says.

“Potentially, the officer could press a button and produce a witness statement for someone to sign, there and then,” says Price.

John Lewis is testing tablet computers in its stores to allow sales assistants to check what items are in stock while they are with a customer.

“They have JohnLewis.com on their pad, so that enables us to show the whole range," says Coby.

And Hampshire County Council is banking on mobile technology to bring big savings in office costs.

The council’s “Workstyle” programme will make it possible for people to work on the move, from home, from drop-in points and from partner organisations, says head of IT Jos Creese. 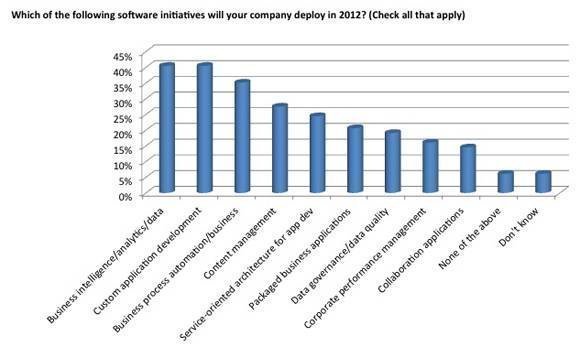 Business intelligence, analytics and data warehousing is a high priority for 35.8% of UK IT professionals and a medium priority for 56.6%, according to the research.

It offers the prospect for businesses to generate new revenue streams from data they already hold.

“It is one of the things that just about everybody is talking about,” says Ovum analyst Roy Illsley.

He plans to develop the Channel 4 website, adding registration content that will allow the broadcaster to analyse viewers' preferences.

“We are doing more work on analytics to understand user behaviour so that we have more to offer to advertisers,” he says.

John Lewis's Coby is evaluating a project to build a customer knowledge database, covering the John Lewis department store and the Waitrose supermarket.

“It will give us a better understanding of what our customers want, and the ability to be able to personalise their needs,” he says.

On a smaller scale, Ali Jaffri, ICT manager at housing association Gallions Housing, is investing in a database that will help the association manage its relationships with suppliers.

“We have a very small database at the moment to do purchase ordering, but we are going to streamline purchasing, and have a single supplier list so we can ask suppliers for more discounts,” he says. 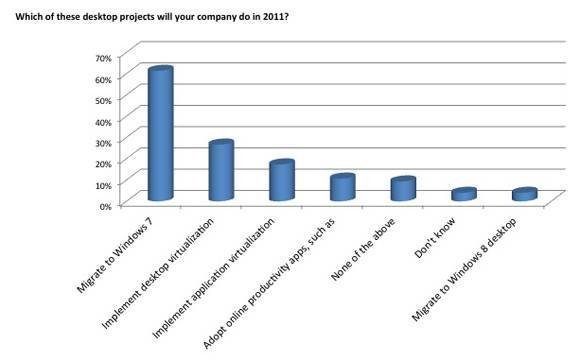 Microsoft’s announcement that it will end support for Windows XP, is a powerful incentive for companies to upgrade to Windows 7 this year.

Some 60% of UK professionals, are planning Windows 7 projects this year, the Computer Weekly/TechTarget survey reveals.

“Windows 7 is very much on our minds,” says Price at West Midlands Police. “At this point, we are looking at a Citrix-based introduction.”

Running Windows 7 on a thin client makes it easier and less expensive to manage IT infrastructure, and to provide mobile access to company systems.

Some 27% of UK IT professionals questioned are planning similar thin client projects this year, the research found. 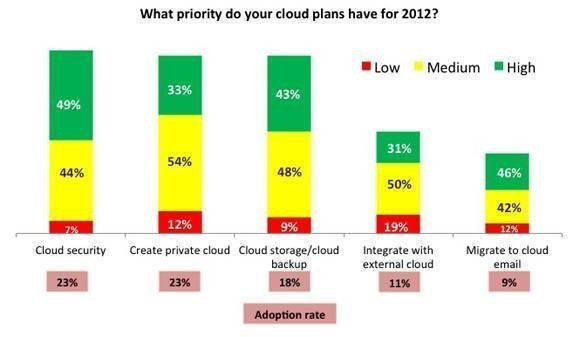 Cloud computing has yet to take off in the way it was expected to. Nevertheless, some 16% of IT professionals plan to invest in private cloud this year.

And 12% are planning to integrate external cloud with their internal systems, according to our research.

For cash-strapped businesses, cloud computing, particularly software-as-a-service (SaaS), is the best strategy to reduce IT costs, according to Richard Hall, an expert in company restructuring.

“Most enterprises are looking at a mixture of infrastructure-as-a-service [IaaS], blended with the existing IT, as a hybrid. But ideally, we are looking to large shifts to SaaS,” he says.

Creese at Hampshire County Council also sees cloud computing as key to keeping IT costs down, and has consolidated much of the local authority's estate already.

For others, cloud is a lower priority. West Midlands Police, for example, has a large number of legacy IT systems that would be impractical to transfer to the cloud.

“When you move from quite a heavy investment in legacy systems, you don’t change it all over night,” says Price.

Fraser also intends to keep Sainsbury’s IT out of the cloud. “The cloud is very present in the news at the moment. We do take some things as services, but when we take them we often buy the complete service,” he says.

Read more about our 2012 IT priorities research here:

Click here for more coverage of IT priorities in the UK, US and India

Taken overall, businesses are spending on IT again, though they are still cautious and are focusing on projects that will bring a quick return.

“It’s a case of you can’t run an eight-year-old operating system for ever and a day. You have to make an investment,” says Ovum's Illsley. “There is a bit of a sense we have cut too much – now we have to get it back.”

For some organisations, such as Channel 4 and John Lewis, investing in IT is a way to help grow the business when new revenue is hard to come by.

Data analytics, in particular, can help businesses build better links with their existing customers, and help them understand what their customers are looking for.

The economic climate in Europe continues to look challenging, with much uncertainty in the Eurozone.

But the prospects for IT look encouraging, with most organisations viewing technology as a potential solution to tough trading conditions, rather than an area for wholesale cost-cutting.