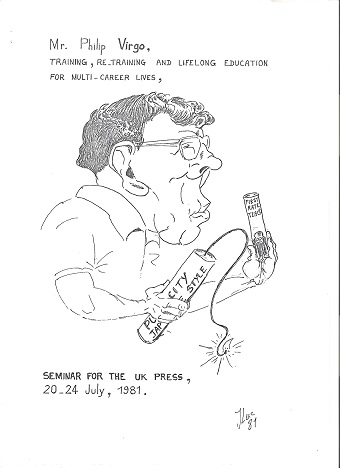 The stick of dynamite is labelled “Publicity Japanese Style”. The tube of sweets is labelled “First Rate Teachers”. I had no say in the cartoon and did not see it till afterwards.

The House of Lords Report on Digital skills gave me a curious feeling of “deja view” (see the date at the foot of the cartoon above) with its statement that millions of jobs are at risk from automation and its subsequent calls for digital skills for everyone and the Internet as a utility.
Back in In 1981 the late Donald Michie had been invited to organise the annual Sperry seminar for the UK Technical Press. His theme was “Intelligent systems: the unprecedented opportunity“. The Micros in School Programe was in train and, in return for first class travel for myself and my wife to the South of France, plus a week of incredibly stimulating company, I was tasked to not only give the thinking behind it, but also think through the likely consequences. The abstract for my contribution to the resultant book read as follows:

“Most of the basic skills needed over the next hundred years can be predicted with reasonable certainty but many of the precise trades and professions cannot. “Age related careers” is an employment strategy which can handle such uncertainty. Fundamental changes to the education system are necessary. Information Technology makes these possible at affordable cost. Encouragement and favourable publicity are more effective weapons of persuasion than coercion.”

The cartoon, with which I was presented, relates to my comments, (not all recorded for posterity in either the book or the separately published political version, available on-line courtesy of Blogzilla), on the need to give average teachers the confidence to become coaches, using the new technology to help their pupils acquire skills and understanding which they did not themselves have. In other words, on the need to give priority to the “leading out” roots of education, as opposed to passing on the skills and mores of previous generations – as per the wikipaedia definition (which accurately described, then as now, the mainstream).

The report of the House of Lords Enquiry indicates very clearly how little progress we have made in meeting that challenge. On March 12th the Real Time Club (45 years young and still reinventing itself), hosted in Houe of Lords by a member of the enquiry team, will hear from those who appear to have found out how to make a profitable and fast growing business from doing so. I look forward to hearing whether I believe their solution. My own experience in the 1980s, with organising IT awareness courses for older generations (including taking apart Apple Computers to insert graphics boards to play silly games and do basic coding, prior to playing global corporate politics over a pastiche teleconferencing network), indicates that it should be possible do so today at much lower cost than we used to charge the main boards of the companies we were helping prepare for difficult discussions on IT policy.

Yesterday I took the opportunity to take another look at “Cashing in on the Chips” published in 1979 (containing the original call for a Micros in Schools programme), the New Scientist review of “No End of Jobs” (*) published in 1984 and my own submission to the House of Lords Enquiry.

So how do YOU, “dear reader” help us all to break out from Goundhog day and deliver the aspirations in the House of Lords report?

As I said in my previous blog, the good news is that this is first time Ofcom has indicated that it is planning to take the needs of business users (particularly SMEs who cannot afford lesed lines) seriously [see page 26 of the Draft Plan for details).

Ofcom is also planning to take a good look at fixed and mobile Not Spots (see page 32).

The plans for work on Online Child Safety are interesting (see Page 35 ) but the critical path is Age Verification. Here the Digital Policy Alliance appears to have already made good progress in assembling a team that will lead the drive for practical and credible answers – because the participants need them for marketing and moral, as well as regulatory, reasons.

Page 43 refers obliquely to the need for more work on performance measures, not just quality of service but even more interesting is the reference in the section on “Protecting onsumers from harm” (starting page 44) on the need to work with groups like the Internet Engineering Task Force on removing the vulnerabilities that enable spoofing.

I also recommend reading the rest of the “Protecting Consumers from harm” and thinking not only how Ofcom could and should and should address the issues it raises but the roles of others in doing so.

2) Take a look at the House of Lords report, consider how the recommendations might be implemented, then consider how you think they should be and what youc can do to help.

There is a lot of worthy comment and generic material in the report, but when it comes to action on skills the devil is in the detail, usually in the funding and incentive mechanisms, including the performance measures and league tables used reward and recognise those meeting centrally set objectives (with which the report is peppered).

I have said (above) why those of you who are interested in remotivating staff (or teachers) for the Digital Age should try to attend the next meeting of the Real Time Club and then consider just how much (or little) this should cost using the the technologies and techniques now available – although there may still be places available for those of you near Huddersfield to get a view from the grass roots this Wednesday at the presentation of the survey on the results of the first Digichampz exercise.

I personally think  that by far the most important recommendation in the House of Lords report is that the Tech Partnership be tasked to lead an employer-driven review of the offers of the Further Education sector with a view to improving the apprenticeship packages on offer (Parag 314 onwards). The weakness of this recommendation is that a growing number of apprenticeships are graduate and post graduate level, linked to the High Education sector. The review should therefore encompass the actions listed in the following paragraphs on High Educations and Careers Guidance, albeit not necessarily inside the first six months

There is a lot in the report on Women in Technology and on Cybersecurity (page 36 onwards). I have commented in the past, albeit mainly en passant, on why you should employ women rather than men if you are serious about information security. I plan to return to this theme in my next blog.

3) If you are actively in trying to get socially and geographically inclusive Broadband to those in your Parliamentary Constituency ask your MP if he can get you an invitation,on his or her say so, to the event on “Broadband for ALL” being planning by the All Party Space Group and Digital Policy Alliance, in the House of Commons on the afternoon of 10th March. The aim is to cover the current state of play with regard to the availablity of the full range of technologies – from fibre, wifi and mobile (for social housing and inner city commercial centres) to satellite (for hill farms, rural businesses and disaster recovery – e.g. fire or flood taking out terrestrial networks). Advance notices have been sent to DPA members but the details are not yet on the website because some of the industry speakers have yet to be confirmed.

(*) Unfortunately “No End of Jobs” is not itself on-line (I have just paid ten times the original price for a copy to supply to anyone willing to scan or digitise it). Interestingly what looked to New Scientist to be the “silliest predictions” might already have come true – but for the failure to compete “the recabling of Britain” by 2002. That was, of course, Government policy until 1997 and the introduction of Local Loop unbundling to save US bondholders, who then owned NTL and Telewest, “from taking a haircut” with a distress sale to Sky

P.S.  Now received a copy of “No End of Jobs” via Amazon and made time to scan the first page. Remember it was written in 1984, so for Japan read China. For West Germany read India. What has changed since: apart from importing immigrants to look after our elderly in overcrowded NHS hospitals, instead of making use of technology to enable them to live at home. One of the theme was the job creation effects of “Prolonged active life”: enabling clinicians to spend time with patients instead of on paperwork and deploying “robotics for rheumatics” as well as all the telecare and telemedicine technologies that we are still talking about but not deploying and enabling. 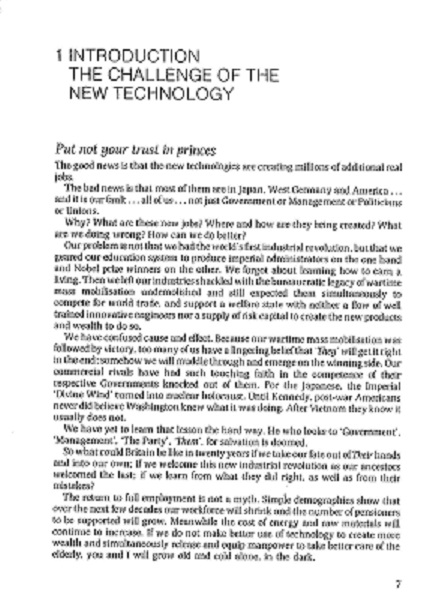