As the whole of Britain relaxes to watch Andy Murray take on Rafael Nadal at Wimbledon, it seems that a hacker has managed to infiltrate Twitter, causing a wave of spam tweets featuring the words “unemployed single mom” and a random series of cash amounts you can earn working from home.

Hacking groups such as Anonymous and the recently disbanded Lulz Security have caused chaos on the Internet in recent weeks, but this latest hack appears to be just spam, rather than anything more politically motivated
Facebook has suffered a number of similar problems recently with the ‘dad walks in on daughter’ link being a similar example of spam wall posts. The danger for Twitter is that with an open and simple API, if spam merchants start flooding the site with their wares, will we need spam control for tweets in the same way it has become essential for email?
HT: @andypiper 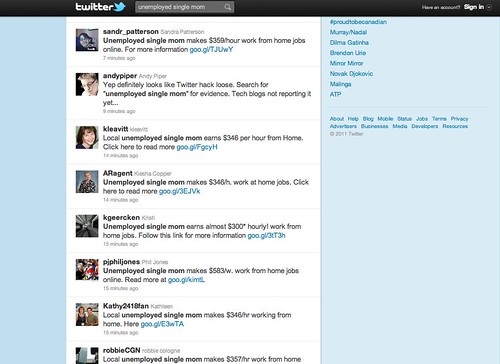