Let’s face it: our road transport systems are jamming up – and it’s just getting worse! In order to improve transport infrastructures, the global focus is on the merger of physical transport and telecoms to optimise transport volumes, speed, accuracy as well as security, and actually reducing the environmental impact. Smart traffic management needs Software-Defined Networks (SDN) and Software-Defined WAN access (SD-WAN) to manage hefty increases in mobile data traffic.

All over the world, road, rail, sea and air transport lanes are under pressure to handle increasing traffic volumes. We have in previous blogs reviewed various aspects of the challenge at sea (Maritime network connectivity – all at sea?), and in public transport (SD-WAN handles fleet management and passenger services).

Road transport planners such as the ones in Singapore in their 2030 Smart Mobility plans (Source: https://www.lta.gov.sg/content/dam/ltaweb/corp/RoadsMotoring/files/SmartMobility2030.pdf) 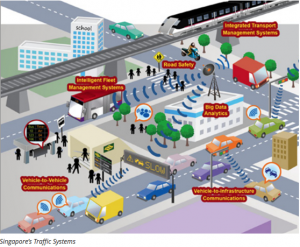 SD-WAN is a key enabler

Better road traffic management can alleviate traffic jams, but will entail a huge increase in WAN traffic volumes. Software Defined Network (SDN) and Network Function Virtualisation (NFV) technologies are emerging to handle the surge in data volumes on the WAN. The software-centric approach redefines the core WAN architecture, enabling it to adapt to fluctuating and complex network traffic patterns, and the ever-growing demand for mobile comms.

Mobile access will use a wide range of network services: via satellites, multiple cellular mobile services, Wi-Fi, Bluetooth and right down to close-range, Low Power Wide Area (LPWA) communication for Internet-of-Things (IoT) services. The autonomous car will need to intelligently access several of these channels simultaneously.

That requires intelligent mobile SD-WAN access technologies from vendors like Peplink and CradlePoint (see update and correction at the end og this blog!) that can bond available access channels to handle the wide range of connections from IoT traffic bursts to huge terabit file transfers.

Real-time traffic management relies on sensors feeding data to algorithms that identify where congestion is likely to occur (e.g. at traffic lights and in lanes) and what alleviating measures may be undertaken to minimise them.

Sensors come in many shapes and forms. Traffic IoT includes:

The automotive changes we are witnessing today all point to a steep rise in mobile communication needs that can adapt to changing signal availability be it cellular, Wi-Fi or emerging IoT communication standards. That will require intelligent SD-WAN devices to optimise access to and use of multiple network services.

A reader points out that Cradlepoint does in fact not provide bonding capabilities in its SD-WAN router units. The Cradlepoint COR IBR600 router only detects network failures and seamlessly switches over to another active connected data source. I agree that this is not full bonding, merely failover. Mobile bonding, defined as the ability to aggregate bandwidth of all available wireless WAN connections, allowing the router to conduct a session over more than one connection simultaneously, comes from a few of the SD-WAN router vendors. Besides Peplink with its MAX On-The-Go multichannel router, these vendors include Viprinet with its multichannel VPN router, the Mushroom Networks Portabella, and arguably also Icomera which provides mobile connection services for buses and trains that aggregate parallel data networks.