Microsoft continues its journey towards becoming ‘arguably more interesting than it used to be’ this week at its Build 2015 developer-centric conference and exhibition in San Francisco. 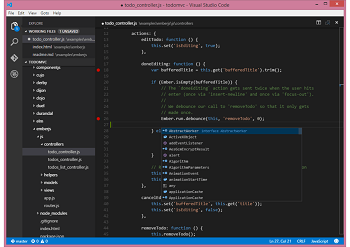 “Microsoft has bold ambitions for platforms that empower developers across Windows, Azure and Office,” said Satya Nadella, CEO of Microsoft. “Together, we will create more personal and more intelligent experiences that empower billions of people to achieve more.”

NOTE: Redmond even listed Windows last there, who’d a thunk it?

It is also known to be a lightweight, fast, keyboard-centric tool.

The official line is that it is code editing redefined and optimised for building and debugging modern web and cloud applications.

What also comes to the party here with Visual Studio Code is full IntelliSense – this is essentially capability for code completion and formatting i.e. extremely useful.

NOTE: IntelliSense is the general term for a number of features: List Members, Parameter Info, Quick Info, and Complete Word. These features help developers to learn more about the code you are using, keep track of the parameters you are typing, and add calls to properties and methods with only a few keystrokes.

The actual downloads of Visual Studio Code will be available here.