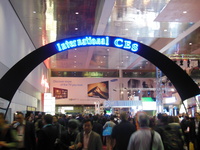 Spending a week in Sin City for the Consumer Electronics Show (CES) was surreal and exhausting. It never sleeps, and as a technology journalist in Las Vegas covering the biggest tech show of the year – neither do you.

So CES is over and now that I’m no longer jet lagged -proven by being able to make a cup of tea this morning, without adding coffee – I thought I’d piece together five lessons learnt from a week under the neon lights:

Well there you have it. Great week all around and CES, hopefully see you next year!