Latest Blog Posts
Related Content
BlogRoll
Latest News
Download Computer Weekly
In this guest post David McClelland gives his impressions of the Nokia Lumia 930,
the first high-end handset to launch with Windows Phone 8.1.
Hardware
The Nokia Lumia 930 is a substantial handset in more ways than one. First up, the body: Nokia has adopted a sturdy aluminium unibody for its latest flagship, but has still chosen to decorate its back with the signature polycarbonate – neon green and orange get the Lumia treatment this season, with white and black completing line-up. 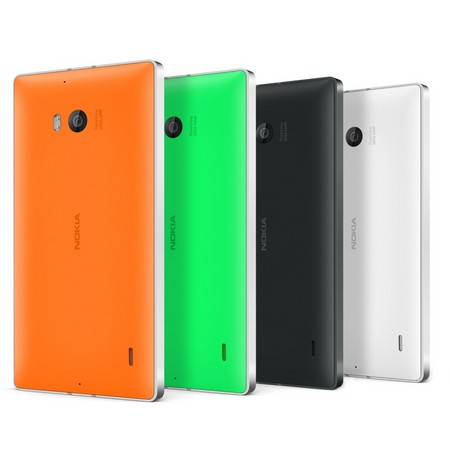 The Lumia 930’s Full HD 5-inch OLED screen is striking too: blacks are black, colours pop and despite the high-gloss it repels greasy fingermarks well, remaining readable even in direct sunlight. The bezel is narrow enough, and the curved edges of the scratch-resistant Gorilla Glass 3 screen lap onto the handset’s chassis, mirroring the contours on the rear. 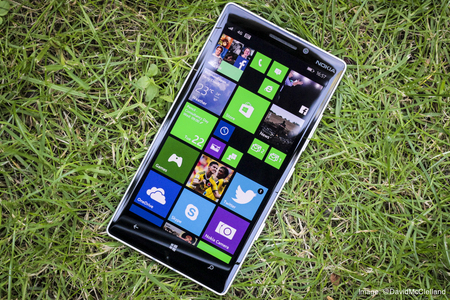 The volume rocker, power and camera shutter buttons all sit along one side of the handset. This keeps the aesthetic clean but means that securing the 930 into most after-market car kits will result in one or more buttons being permanently depressed. Form 1, Function 0.
Beneath the vibrant exterior sits a quad-core 2.2 GHz Qualcomm Snapdragon 800 chipset, 2 GB RAM and 32 GB storage. While the CPU is last-year’s model it’s certainly no slouch. Despite the missing MicroSD card slot Microsoft now bundles 15 GB of  OneDrive cloud storage for free, and 1 TB if you’ve an Office 365 account.
Battery and Wireless Charging
As with other unibody handsets the 930’s battery isn’t removable, although I found the 2420 mAh unit lasted through the day.
Having toyed with wireless charging on the Lumia 920, Nokia once again integrates the feature and this time includes an induction charger in the retail box.
Disappointingly, I found it a bit flaky. On more than one occasion I left the handset atop the charger to find it hadn’t charged the phone. Software bugs need to be ironed out too, with the 930 insisting it was still charging hours after its removal from the charger.
Wireless charging is seen as a panacea by some but until reliability is improved many might still prefer the reassurance of a cable over the questionable convenience of a mat.
Also worth pointing out is that the chassis can get very, very hot on charge or in use.
Camera
The Lumia 930 features a terrific 20-megapixel PureView camera which makes shallow depth of field shots look natural without any clunky software processing. Optical image stabilisation, ZEISS 6-lens optics, dual-LED flash and lossless zoom top out the specs, but again the Lumia’s screen steals the show, making pictures pop like a print. 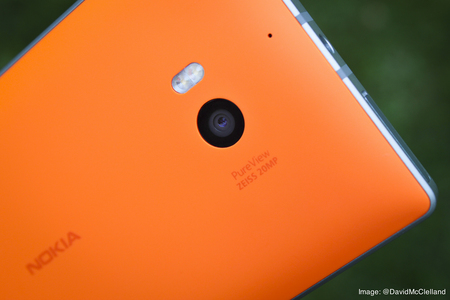 Software
Windows Phone 8.1 is the newest version of Microsoft’s mobile operating system introducing features which many hoped might bring it in line with its competitors.
Action Centre apes the notification bars seen in Android and iOS. A swipe from the top of the screen recalls missed messages, a customisable quick menu and a shortcut to the phone’s main settings. A welcome addition to the operating system. 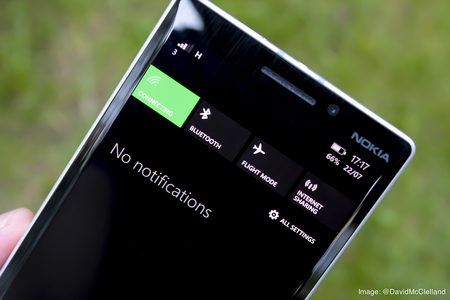 Swipe-style typing also debuts and, once you’ve the hang of it, is very accurate. However, Cortana, Windows Phone’s answer to Siri, hasn’t made it onto UK handsets yet – expect to see it (her?) on Windows Phones by the end of the year.
Email and Productivity Apps
For many email will be a main driver and Microsoft makes setting up accounts simple. I didn’t get the chance to try the 930 with an Exchange mailbox, but it handled multiple outlook.com, IMAP, Gmail and POP mailboxes with aplomb.
Windows Phone 8 also does some useful things around the concept of the unified inbox. Instead of a single inbox encompassing all configured accounts, individual email accounts can be grouped or ‘linked’ together. This makes it possible to combine work email addresses into one unified inbox and personal accounts into another, each accessible through its own live tile.
The bundled Bing News and Bing Sport apps are intuitive and well designed pulling news from a variety of credible sources. Fundamentally, for a news app to succeed it needs to leave me feeling as if I’ve caught up – these do exactly that, with style, and allow custom feeds too. 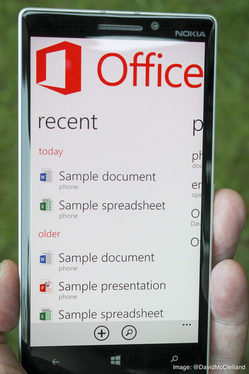 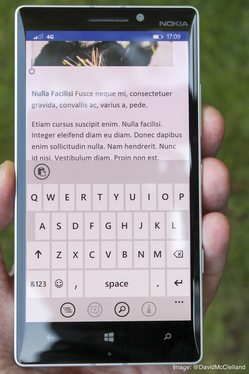 Microsoft Office connects you with documents stored on your OneDrive or Office 365 cloud as well as with email attachments. Excel, Powerpoint and Word are well executed apps, although losing what feels like two-thirds of the display to the over-sized on-screen keyboard is a shame.
Windows Phone UI
Microsoft’s spartan UI works hard to differentiate itself from its identikit competitors and, in general, it works well. However, for the sake of productivity I’d prefer to see more actual content on the screen.
A case in point is the official Twitter app – even with the smallest font I can see no more than three or four tweets per screen; similarly, the email app reveals up to six messages before scrolling. At 5 inches and 1920 vertical pixels there’s a lot of screen real estate on the Lumia but the important apps just don’t seem to fill enough of it.
Conclusion
Despite the ’80s-styling on the rear the Nokia Lumia 930 is Windows Phone’s most mature handset to date.
Its productivity credentials are top notch, and OS integration with Microsoft cloud apps and services mean it’s a capable business workhorse as well as a fun down-time device.
All the Windows Phone ecosystem needs now is more apps, and with high-quality handsets such as this they’ll be sure to follow. 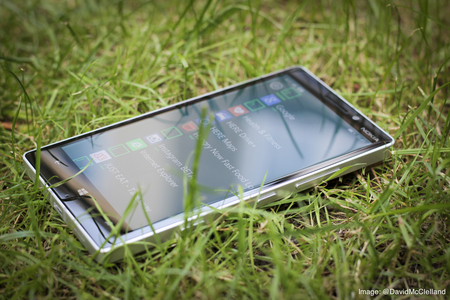