Ambitious startups and developers around the world got a big treat from Google ahead of the weekend – $100,000 worth of Google cloud credits along with 24/7 support from the tech experts at Google.

Urs Hölzle, Google Fellow launched the “Google Cloud Platform for Startups” initiative on Friday to help startups take advantage of its enterprise cloud offering and “get resources to quickly launch and scale their idea“. The free cloud resources are aimed at helping developers focus on code without worrying about managing infrastructures. Google has also not set any restrictions on the type of cloud services users can spend their credits on giving them complete flexibility to choose IaaS, PaaS or SaaS or even data-related cloud offerings.

But to qualify, the startups will need to have less than $5m dollars in funding and have less than $500,000 in annual revenue. And the cloud credits are available through incubators, accelerators and investors.

Cloud computing has always been a technology that democratized IT by giving startups a level-playing field to compete with the big players. And cloud behemoth AWS is seen as the “go-to” cloud option for the cool, emerging poster-children of the web such as Netflix and Instagram (before it was acquired by Facebook). 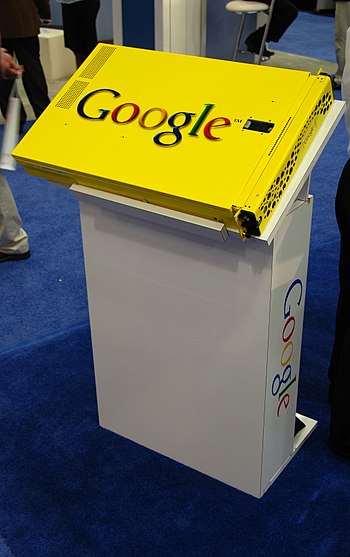 Google Appliance as shown at RSA Expo 2008 in San Francisco. It was only a computer case with no parts inside.-Daniel A (Photo credit: Wikipedia)

Google, AWS, Microsoft and IBM have so far been tripping over each other to announce price drops to lure more users to their cloud services. AWS launched a free programme called AWS Activate to help selected startups with resources for working with AWS. It includes services such as AWS web-based training, virtual office hours with an AWS Solutions Architect and credit for eight self-paced training labs.

But Google has now upped the game by targeting startups with cloud credits of the size and scale that hasn’t been seen before.

Cloud giants are targeting the ambitious startups because today’s startups can become tomorrow’s enterprises and the providers want these potential customers to use their platforms.

Startups are lean and are quick at adopting new technologies such as the cloud but need some technical expertise so they can focus on their business than the underlying technology. Google is offering exactly that in a bid to get a footprint in the enterprise IT.

It will be interesting to see how UK’s promising tech startups such as Swiftkey and Hailo use these cloud credits offered by Google. But more importantly how quickly AWS, Microsoft and IBM respond to this.