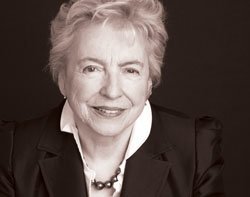 Dame Stephanie "Steve" Shirley is a British businesswoman and philanthropist. In 1962, Shirley founded the software company F.I. Group (later Xansa, since acquired by Steria). She was concerned with creating work opportunities for women with dependants, and predominantly employed women – only three out of 300-odd programmers were male – until the Sex Discrimination Act 1975 made that illegal.

She adopted the name "Steve" to help her in the male-dominated business world. In 1993, she officially retired at the age of 60 and has taken up philanthropy since then. Shirley was appointed Officer of the Order of the British Empire (OBE) in the 1980 Queen's Birthday Honours, and promoted Dame Commander (DBE) in the New Year Honours 2000.

She set up the Shirley Foundation, based in the UK, in 1986 with a substantial gift to establish a charitable trust fund. Its mission is facilitation and support of pioneering projects with strategic impact in the field of autism spectrum disorders, with particular emphasis on medical research.