Consultancies in the IT sector have suffered a sticky summer with a rise of more than a third in insolvencies since last year.

The Exaro Insolvency Index reveals that the quarter to August 2014 saw 203 IT consultancies file one or more insolvency notices, a rise of 36.2% from 149 for the same period in 2013.

Insolvencies among information and communication companies have risen year-on-year by just under 10% in the quarter to August, up from 495 to 542. This is a decrease from the figure of 581 for March to May, although that was a rise on the previous year of 7.2%.

Tudor Aw, head of technology at KPMG, the accountancy group, said the rising insolvency rate does not reflect the general health of the sector, saying: “Our research shows the sector is in the best health it has been since the 2008 recession.

“Confidence is high, along with capital expenditure, job hiring and purchasing activity. However, good times do spark increased activity, and a lot of startups. This rise in new companies does result in a higher level of failures, because they present more risk than the more mature businesses.”

The latest statistics come in the wake of figures for May 2014, which showed insolvencies in the sector were levelling off, with a year-on-year fall for IT consultancies specifically.

This was the first sign of a turn-around in rising insolvencies among information and communication companies since December 2013, but the latest figures show that to have been short-lived. 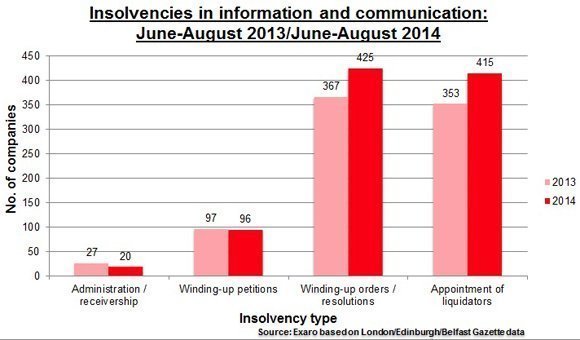 The sector is suffering year-on-year rises in insolvencies while the rest of the economy saw close to the same level in the quarter to August 2014 as in the same period in 2013.

Andrew Corbett, membership services director of the UK IT Association, said: “It remains true that the smaller IT and digital companies are complaining to us that they continue to have difficulties in being paid on time, and maintaining their prices at a decent profit margin.”

“We also think that a significant number may have accumulated debts over the last few years in the hope that the end of the slump would solve all their problems. They are finding that the recovery has not solved their own underlying problems. They may simply have decided to give up hoping for a better tomorrow.”

The Exaro Insolvency Index shows the number of information and communication companies that entered the early stages of insolvency fell slightly.

As the graph shows, there were 20 such companies that went into administration or receivership in the quarter to August 2014, down from 27 in the same period the year before. Winding-up petitions fell in the same period by one, going from 97 to 96.

The figures show that the sub-sector for business and domestic software development continues to struggle, with 43 such companies in the insolvency process in the quarter to August, up 16.2% for the same period last year from 37.

The Exaro Insolvency Index draws on insolvency notices in the London, Belfast and Edinburgh Gazettes, along with information from Companies House. In the source data, a small proportion of the insolvencies is not ascribed to a specific sector