Organisations are struggling to cope with increasing datacentre complexity according to a global survey of 2,453 IT professionals from Symantec.

The vast majority (79%) of organisations globally said their datacentres were getting more complex Symantec's  2012 State of the Data Centre Survey found.  A rise in business-critical applications (cited by 65%, data growth (51%), mobile computing (44%), server virtualisation (43%) and public cloud (41%) were driving greater complexity in the datacentre environment.

Datacentre staff faced  challenges in managing all aspects of IT including security and infrastructure, disaster recovery, storage and compliance within the datacentre due to the complexity of the environment, the study further revealed.

In terms of unscheduled downtime, on average, a typical organisation experienced around 16 datacentre outages in the last 12 months costing $5.1m (£3.14m) primarily because of system failures followed by human error and natural disasters, the study found. 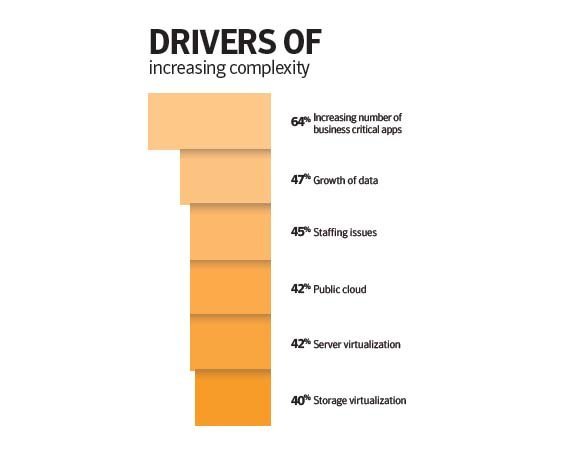 Symantec said investments in virtualisation software, blade servers and other technologies to modernise datacentre infrastructure are wasted unless businesses tackle the issue of complexity.

IT professionals that participated in the study said they were introducing standarisation, centralisation and more training to beat datacentre complexity. Around 63% of respondents were also considering increasing their budget.

Additional steps such as undertaking audits of IT assets, deploying data deduplication tools and simplifying backup and disaster recovery operations could also help IT mitigate the effects of datacentre complexity, according to Symantec.