If recent headlines are anything to go by, the days of the humble PC are numbered, regardless of whether it's a desktop or a notebook. We believe that is far from the case, and expect the PC to be an essential element of the corporate and personal computing landscape for a long time yet, writes Martha Bennett, vice-president and head of strategy at Freeform Dynamics.

So let's look at things in more detail. The numbers are certainly impressive: in the quarter ending 25 June 2011, Apple sold more iPads than Macs; and in terms of unit sales, Apple devices running iOS (iPad, iPhone, iPod Touch) amounted to more than the combined PC shipments of market leaders HP and Dell during the equivalent time period. But to conclude from those numbers that the "post-PC" era has begun is not just premature, it's plain wrong.

For one, there's a huge installed base of PCs (desktops as well as notebooks) out there, and those machines are not going to be consigned to the scrap heap. Quite the contrary - they are being replaced, and new ones are being bought. Microsoft's PC business grew 8% during the last fiscal year, and the company sold 100 million Office 2010 licenses - hardly the signs of a market in its death throes. That conclusion is reinforced by a further look at Apple: at 3.5 million units, the last quarter set a new record for Mac sales.

This is where it gets interesting, of course: the dynamics of the PC market are indeed changing. While Windows-based desktops and notebooks will no doubt remain the workhorses of corporate computing, there is greater demand than before to have Macs as part of the mix. And there's also no doubt that tablet devices will have an important role to play.

But that's by no means the same as tablets displacing, or replacing, desktops or notebooks. Sure, tablets and smart phones may be outselling the more established form factors at the moment. But how many consumers or companies were already using slates when the iPad came out? We're looking at a market starting from zero here, not a replacement scenario.

Smartphones are a year or so ahead when it comes to market penetration, but they are by no means pervasive at this point. More pertinently, smartphones aren't replacing PCs, they're replacing other phones. Replacement cycles for phones are also much shorter than for PCs, and the same is likely to apply to tablets.

As far as consumers are concerned, there will probably be a few that won't upgrade their PC now they've got a tablet device; there will also be a number who have never owned a PC, but whose needs are met by a slate. But for the majority, the purchase of a new PC will merely have been postponed in favour of getting the latest must-have media tablet.

As far as corporate computing is concerned, there are signs that tablet devices will have an important role to play for specific applications. There are many use cases where a tablet is simply better suited than a PC. What we'll probably see less of over time is "vanity" usage of slates, once their owners realise that certain tasks are performed more quickly and easily on a PC; this applies in particular to any form of content creation. And despite being (mostly) easy to use, media tablets are as much of a maintenance and support headache for IT departments as traditional PCs; if anything, they're even more of a headache, as management tools and security mechanisms for this device class are less developed at this time.

For the vast majority of businesses, and probably also for most consumers, tablet devices are likely to remain a comparatively small part of the mix. This is where we come to dispel another myth: that of device proliferation in business computing. Yes, there are a few signs that the computing landscape is getting more diverse - see the Apple Mac example cited above. And a few companies are beginning to dip a toe in the water of allowing employees to connect their own devices to the corporate network.

Overall, however, businesses are not expecting to deal with a wide range of devices. Research conducted recently by Freeform Dynamics shows that when it comes to supporting mobile computing, most businesses expect some form of notebook PC to be the dominant device (see chart below). The numbers shown in this chart also show that the majority of companies are not expecting to have more than two "intelligent" devices in their portfolio. The second device, though, is not likely be a tablet for the majority, but a smartphone. 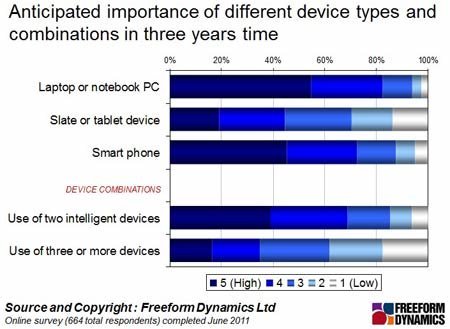 As for the humble PC: according to our survey respondents, the perceived importance of a network-connected laptop or notebook PC is going to increase over the next three years. We rest our case.

Freeform Dynamics is a research and analysis firm which tracks and reports on the business impact of developments in the IT and communications sectors. It uses an innovative research methodology to gather feedback directly from those involved in IT strategy, planning, procurement and implementation.