Eleven million people across the UK are struggling to connect to the internet. Not because of problems with hardware, bad connectivity, or even rural broadband challenges, but because they either don’t know how or are too poor to get online.

A large proportion of those 11 million people live in the most deprived areas of the UK, and while the government is pushing for more public services to be digitised and placed online, this particular cross section of the country does not even have the basic means to access the internet, never mind using online public services.

Unlike Martha Lane Fox’s government-backed GO ON initiative, the Tinder Foundation is a not-for-profit, staff-owned mutual that is working hard at bridging the digital divide in Britain.

“We think of ourselves as the catalyst for making change happen,” says CEO Helen Milner.

Tinder has a learning platform called Learn My Way where individuals can start learning about how to get online, how to go about getting an email address, as well as receiving advice on what devices to buy and much more.

The organisation’s network has 25,000 volunteers, and 5,000 partners that provide spaces, of which 3,000 are full centres and the rest access points. Milner says it’s the barns, buses, launderettes and chip shops – the “wacky ones” – that get press attention, but Tinder mainly works across hyper-local communities in libraries and community centres.

These hyper-local centres and access points can even offer individuals a conversation about getting online, without rushing straight on to a computer.

“I love the model for its simplicity,” says Milner.

Tinder is not a charity because Milner says she didn’t want to give power to its trustees. She calls Tinder a “big club with a shared vision”, which gives out grants where it can.

The organisation does receive grants from government and foundations, which it then allocates to its hyper-local partners for particular projects to pay for broadband, training volunteers or lighting in the building.

“A lot of grants these days can only be spent on particular things,” says Milner. “Sometimes they may be as small as £500, which helps those organisations keep their lights on.”

More on the digital divide

As well as government grants, Tinder also has contracts with Nominet, NHS England and the Department for Work and Pensions, where it runs the DWP’s Digital Deal programme to inspire housing tenants to get online.

It also receives money through private sector partnerships, with companies such as EE and TalkTalk, to train staff to be digital champions. Additionally, the Learn My Way platform collects data on individuals, so this can be given to companies for research purposes if money is donated.

But the private sector doesn’t always offer money – Asda has recently worked with Tinder to provide 350 of its partners access to community spaces and cafes. “That’s a big part of what we do,” says Milner.

The government is making a big push to become ‘digital by default’ by offering many public services online.

It is currently halfway through an ambitious two-year project to digitise 25 of the most used government services - from visa applications through to benefit claims - and move them online.

But if 11m people in the UK don’t even have the means or skills to access the internet, this is a huge challenge for a government pushing forward its digital agenda. This is where organisations such as Tinder are stepping in to help.

“If you help people to use the internet themselves and make them realise it’s relevant to lots of different aspects of life, they will go and use government services,” says Milner. 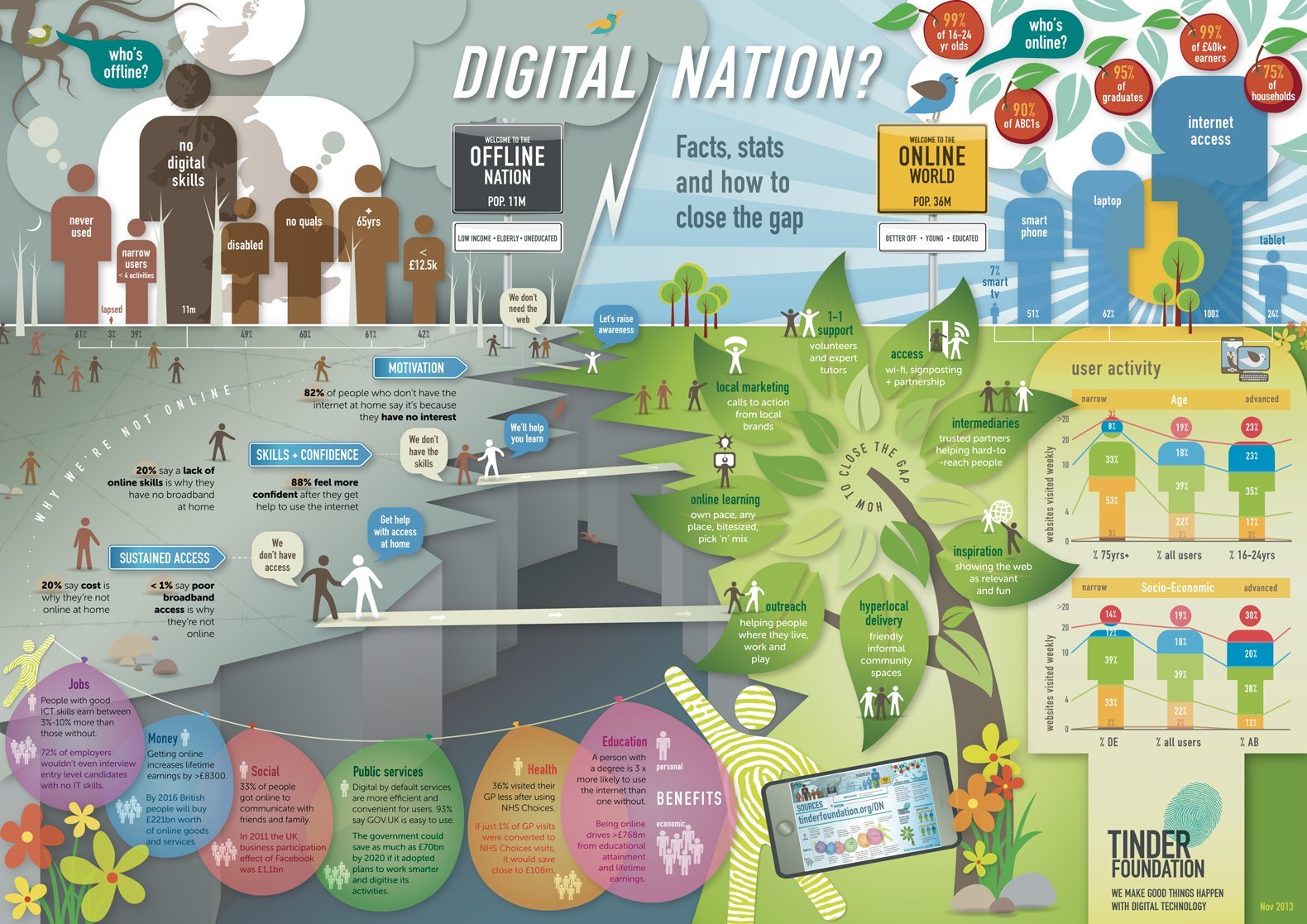 According to Tinder, more than half of those people who get basic online skills then go on to buy services and products online in favour of face-to-face or telephone transactions.

“That’s amazing because we don’t force them to do that,” she says. “We do have online courses about public services, but we put it in the suite of courses, into the picnic basket to choose from.”

And Tinder’s approach is very cost effective, “We can help someone get basic online skills for £30 per person,” said Milner. “But if you’re going to pay someone to help an individual with Universal Credit, then you’re going to have to pay them every time they help them.”

Milner believes it is much more cost effective for the government to make sure people benefit from a basic grounding in online skills, who can then become a sustained and regular user of the internet to then go on and use online public services across the board.

But the benefits for government of having more people online can only be reaped if the more money is invested.

“Digital inclusion is going up the agenda, but it’s really time for action,” says Milner. “It’s a global competitive race, and we could do even better if we put more effort and resource into this.”

Social benefits of being online

And it is not just cost savings for the government and ease of use for the citizens – being online brings a wealth of benefits to users.

“If people have basic online skills, they’ll also be more employable,” says Milner. “If you have a job, you pay taxes, your earn money, you spend money, so it’s actually all good for the economy.”

She also says it’s good for society, and for reducing isolation in older people. Being online allows them to communicate, and manage their life more efficiently.

“You don’t need to physically go to the doctor to order a repeat prescription so why should you?”

These are people who live in communities where no one has an iPad, and they didn’t even think it was possible to even see one

But Milner says the “internet is about balance”, which can be difficult to explain to older people.

“Go to your bridge club, go to the bakers to see what you want to buy today, but order your cat food and toilet roll online, and get your repeat prescriptions online because that’s not the fun stuff.”

Help needed from the private sector

Milner says there are a lot of misconceptions about how people on low incomes all have smartphones and are on Facebook; in fact only 50% of the people who use the internet in the UK are on Facebook.

She says that she recently spoke to a woman in one of Tinder’s centres who had a chance to use an iPad as part of the training. She told Milner: “I’d seen them on the television, but I never thought I would get a chance to actually see one.”

“So those are the types of communities we’re dealing with,” says Milner. “These are people who live in communities where no one has an iPad, and they didn’t even think it was possible to even see one as it was such a luxury piece of equipment.”

“It’s easy to be in a bubble and think that everyone is like us.”

A total of 20% of the 11 million people in the UK who have never been on the internet blame the high costs of connectivity. But Milner believes there may be creative ways the private sector can help.

“Would it be that expensive for the private sector to give a million people a free device and a free 3G SIM card?” she asks. “It probably wouldn’t be would it?”

The reality is we know where the people are who aren’t benefiting from the internet, we can target that

Milner points out from those 20%, some will never access the internet without some help and discounts, so they’re not even part of the vendor’s commercial considerations.

“It’s definitely a place where the private sector could be very brave and be very bold and do it.”

TalkTalk has been working with Tinder for several years by sponsoring a digital heroes awards programme. The vendor has recently created a Digital Heroes Foundation charity within the company to work on digital inclusion.

But at the end of the day, the solution to the digital divide comes down to throwing money at the problem.

“I don’t want to say money,” she says. “The reality is we know where the people are who aren’t benefiting from the internet, we can target that. We’d need to use that money in different ways, those hyper-local organisations are best placed to help.”

Sheffield council has begun encouraging its citizens to use online services when they come into the council buildings asking for a service. The frontline workers ask whether the person knew they could do that service online, and were able to signpost them to local centres to learn how.

In fact, Milner says the council had even built a computer area to be used by citizens, but found that the citizens with the skills had at home, and the people who didn’t wouldn’t have the confidence to approach the machines.

“They weren’t being switched on because no one was using them,” she says. “They decided to take somebody off the desk and put them as a floor walker, turn the computers on, and talk to people about what they wanted to do and show them how to do it on the internet,”

Milner says it’s a culture shift. “A lot of councils and organisations would potentially set up sessions and schemes to support citizens to learn how to use internet, but this is more compelling changing the culture of people.”