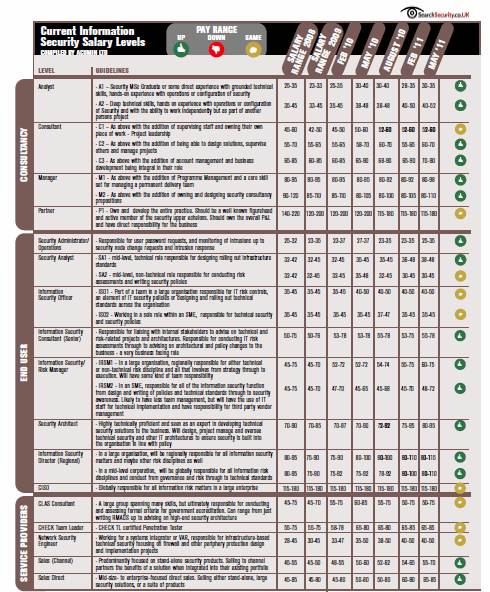 Salaries in information security have begun to creep back up during the last quarter, and, for the first time since the credit crunch began, no section of the infosec market has seen a reduction in pay.

According to Q2 2011 figures supplied by London-based recruitment consultants Acumin, salaries paid to new recruits have either remained the same, or, in some areas, increased slightly over the last three months.  SearchSecurity.co.UK and Acumin have been jointly tracking salaries on a quarterly basis for more than two years, and, during that time, different sections of the profession have suffered or recovered at different rates.

The sharpest change in the most recent quarter's information security salary statistics is a marked increase in salaries for new graduates gaining positions in consultancies, which suffered badly toward the end of last year.

But, according to Chris Batten, managing director at Acumin, companies are now more willing to take on new graduates and provide them with training. “This is a very striking change,” he said. “Consultancy organisations are suddenly prepared to invest in training new people. In fact, in one case, we saw a consultancy offer free training to someone before taking them on, just to see how they performed.”

This accompanies a general recovery in consultancy salaries at all other levels too, with strong technical skills being in particular demand.

In end-user organisations, salaries for low-end security staff have tended to stagnate during the last two years, with only marginal adjustments. The salaries of senior professionals, however, especially those with considerable technical expertise, have begun to revive, and can match those paid by the consultancies. “Medium-sized companies are buying in skills at the moment, and good security architects are in massive demand,” Batten said.

For security pros focused on the government sector -- especially CLAS consultants -- the end of last year proved to be a difficult time, with several projects cut backs, which reflected in lower pay rates. But, the most recent quarter shows a levelling out of pay for CLAS consultants, possibly reflecting the government’s recent announcement that it will inject more money into tackling cyberattacks, Batten speculated.

Software vendors are also offering higher salaries, both to direct sales people with good subject-matter knowledge, and also to people who can develop relationships with channel partners. “A lot of the vendors have treated their channel partners badly in the past," Batten said. "But now the channel is starting to get a lot of attention once again.”