Is it possible for hackers to tap into your set top box ? Computer Weekly reader Jeremy Jones thinks so. Jeremy has sent us a video showing some bizarre subtitles that have appeared on his television set.  The quality of the video isn’t great, but it clearly shows what looks like a rambling child’s story about her mum as a subtitle to the sports reports on the news. Jeremy is mystified, but he thinks his set top box, which he bought at Woolworths for £10, has been interfered with in some way. Can anyone out there solve the mystery ? 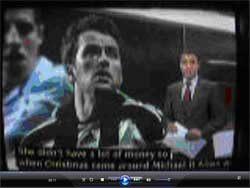