Mirantis is a firm that calls itself a “pure-play” OpenStack company. 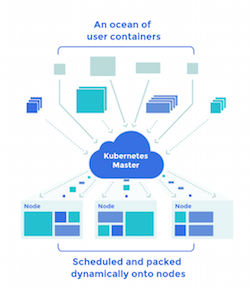 It has a new initiative that integrates Kubernetes with OpenStack.

As reported on Computer Weekly at the above link — Kubernetes works in conjunction with Docker.

While Docker provides the lifecycle management of containers, Kubernetes takes it to the next level by providing orchestration and managing clusters of containers.

Mirantis says it is letting developers deploy containers on OpenStack pretty fast with this technology.

The integration gives developers immediate to Kubernetes clusters with Docker containers without needing to set up infrastructure.

Developers will be able to move entire environments between OpenStack private clouds and public clouds that support Kubernetes, such as Google Cloud Platform.

“Our development work with Google to combine the power of Kubernetes with Mirantis OpenStack makes it easy for developers to manage Docker containers at scale,” said Mirantis CEO, Adrian Ionel.

“Kubernetes automates the management of Docker containers, while OpenStack automates the configuration and deployment of infrastructure resources on which those containers run. By using the two technologies together, developers can focus on creating software because their underlying infrastructure just works.”

“OpenStack’s pluggable design allows users to integrate and leverage emerging technologies like containers, while relying on the proven automation engine in OpenStack to handle compute, storage, and networking.”

The integration uses Murano, the application catalog project in the OpenStack ecosystem.

Murano automatically configures the compute, storage and networking resources for Kubernetes clusters, and provides integration for OpenStack infrastructure components such as load balancers and firewalls.