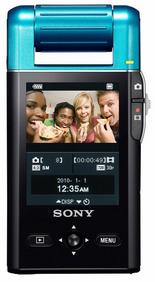 The last time I got excited about a video camera it was the Zi8 but the Bloggie blows it out of the water. Sony are traditionally brilliant at cameras ands camcorders and the Bloggie is the new prodigy that does everything and so much more.

They PM5 comes in four colours, features a rotating lens that swivels 270 degrees. It has a  bright, high resolution 6.0cm LCD screen that shows camera settings in the bottom half of the display while you’re recording. A nice feature is that you can turn the bloggie horizontally and view in landscape format which is a nice touch.

The PM5K also includes a special 360 Video lens adaptor that lets you record panoramic videos, something that’ll get anyone excited.

The Flip came out a few years ago and many, including yours truly, were sceptical about how successful it would be due to the fact that you can capture video on your phone. Safe to say I was wrong and the Flip boomed.

Apple decided to try and get a share of the market by adding video capture to their Nano range (See my review: Video: Nano video reviewed – 3 reasons why it sucks). Drawbacks of the Nano are that it doesn’t have still capture and no HD BUT it is an add-on to a fantastic Nano.

Kodak followed and their latest offering, the Zi8, has HD still camera capture and a mic input. It’s definately the best on the market but Sony’s Bloggie looks like it might overtake it.

Tim - 7 Jan 2010 6:09 AM
Hurrah, Sony do listen! :-| *thud* Removable battery and at last SD!!!!!! 360 degree accessory is interesting, as well as 720/60p and a built in USB interface (which on some systems will be fiddly, but good nonetheless). A flash/LED recording light may have been welcome additions. Low light recording and picture quality will be the deciding factor on this device I believe. Sounds about right on the money for entry price.
[-]

YM How - 12 Jan 2010 9:02 AM
I love the Sony Bloggie's rotating lens. It will allow you to lay the Bloggie flat on a table and rotate the lens towards your subject. No tripod! Here's an idea: how about making a clip-on cover with a foldable stand? Then the Bloggie can be placed upright anywhere, instead of having to carry around a mini tripod. I think it will work better than any image stabilization.
[-]

Jon T Washington - 23 May 2010 4:33 PM
Great post full of useful tips! My site is fairly new and I am also having a hard time getting my readers to leave comments. Analytics shows they are coming to the site but I have a feeling “nobody wants to be first”.
[-]

marioFF - 16 Jul 2010 9:15 AM
i just bought the hd bloggie pm5 and i have to say that it is very easy and fun! I although, never owned a Flip or the zi8 as this is my first camcorder. Ive replaced my old photocamera (olympus fe230) and I am very pleased with the result..! Pros: SD card, removable battery, built in usb, rotating lens, grat picture for both videos and photos. Cons: none so far