Egmont IT acts as an external service provider to Egmont Group’s 150-plus companies, according to CIO Mette Jæpelt.

IT at the company functions differently from all previous places she has worked in the past 35 years, she tells Computer Weekly, in an interview at the Danish-founded media corporation’s headquarters in Copenhagen.

To be able to compete with external service providers, Jæpelt initiated a new IT setup four years ago. “We built a new datacentre, duplicated in two locations in the Copenhagen area, with servers, storage and network equipment. The goal was to make us cheaper and better, and shorten time to market – and it worked out much better than we ever could have imagined,” she says.

For example, the cost of electricity was cut by 2m DKK (£200,000) per year. “In operations we have cut the cost in half and at the same time have much more IT. We have also been able to free up staff. But the most important thing is that the quality has increased a whole lot,” says Jæpelt.

As a result, an increasing number of Egmont Group’s companies have decided to use Egmont IT as a service provider, instead of handling IT by themselves or outsourcing to other suppliers.

“The ones that are using us are recommending us to the other corporations in the group, so we have grown very much during the past few years. This is also due to the fact that the companies are focusing more on their core businesses, and now they feel safe handing IT to us. The fact that we are sturdy and reliable is really important,” Jæpelt says.

Today Egmont IT operates 70% of all IT in the group, which amounts to about 1,000 servers and active storage of more than 5PB. “We have our own private cloud and we also use external clouds,” says Jæpelt. "We wish to be an enabler that delivers the best possible solutions so the business does not have to think about where things are.”

Jæpelt sees the 6,300 employees in the group's corporations both as colleagues and customers. “We have key account managers, and we have price lists and service-level agreements with all companies, and they are negotiating with us and pressuring us really hard. But that does not mean that we are not all colleagues, who are having a real great time together,” she says.

When it comes to certain aspects of IT, Egmont IT is acting as a more traditional IT department, according to Jæpelt. “We are responsible for IT security, intranet, human resources, and a list of other things, and the companies are not allowed to buy these from other suppliers,” she explains.

Jæpelt is not making the decisions about the mandatory IT services by herself – there is an IT board, with delegates from Egmont Group’s four overarching divisions: TV2, Egmont Nordisk Film, Egmont Publishing and Egmont Books.

“We all have to agree on the things we are doing together, and the dialogues we are having are pretty amazing. We are making use of each other, gaining respect for each other's jobs, and developing Egmont Group more and more,” she says.

Prior to becoming CIO of Egmont Group in 2009, Jæpelt was CIO of Egmont Nordisk Film, and she believes that experience at the division is beneficial in her current role. “I know what it means to be head of IT in a division, and that is important since much of our work with the different companies comes down to building bridges. It can take time to reach agreements, but we always succeed,” she says.

Egmont Nordisk Film used to have its own big IT department, but that is no longer the case. “In the middle of the economic crisis in 2009, we made a business case for joining Egmont Nordisk Film’s IT department with Egmont IT, and saw that we could save a lot of money. I got the responsibility for the joint setup, and ever since we have continuously optimised and reduced costs and personnel,” says Jæpelt. 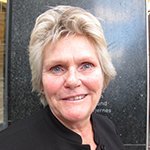 We have outsourced the operations of our datacentre and we have partnerships with lots of application suppliers. We put things where it is cheapest and best

In 2009 Egmont IT consisted of about 75 people, a number that is now down to around 40. “We have also outsourced the operations of our datacentre and we have partnerships with lots of application suppliers. We put things where it is cheapest and best,” Jæpelt says.

According to the IT head, Egmont IT’s role is to support Egmont Group and be a business enabler. “And to be able to do that, we have to think digital, since Egmont Group puts a lot of effort in growing its digital revenue,” she says.

As part of this, Egmont Group has acquired several other companies during the past few years.

“Another important thing we are working on is to help our big publishing division with a new IT solution to handle online reading, and this requires a lot of us when it comes to integration,” says Jæpelt.

Egmont IT is also implementing a new ticket and condiment system for all the cinemas in the group, she explains: “This will make things much easier for the cinemas and customers. It will also make it much easier to integrate new acquisitions.”

An ongoing – and never-ending – task is to try to keep up with the demand for new technologies, she adds.

“People working in media are very keen on getting new things all the time. Everybody wants an Apple Watch and other new hardware, and they are very innovative when it comes to the development of their companies,” says Jæpelt. “It is an exciting challenge for us in IT – and I can be honest and say that we have somewhat different views on IT security.”