Today’s cloud market still has a long way to go before it can be deemed a utility model, a new report suggests.

451 Research's Cloud Pricing Codex 2013 suggests that being able to compare and switch infrastructure as a service (IaaS) providers is still a "huge jump" away, because of providers' differing definitions of on-demand pricing, alongside a lack of universal standards.

It goes on to say customers face a similar challenge trying to understand what they are buying and how much it costs. Although 89% of the 53 cloud providers surveyed said they offered on-demand pricing (usually along with alternative options), most providers differ in what this means. “Comparing like for like or weighing the pros and cons of different methods is currently a nightmarish task, with each provider using confusing terminology and differing language,” 451 said.

The Cloud Pricing Codex attempts to bring clarity to this confused market by placing providers’ pricing structures into one of eight distinct categories [see chart below]. But even with the codex to hand, the assessment task for buyers is still tricky. 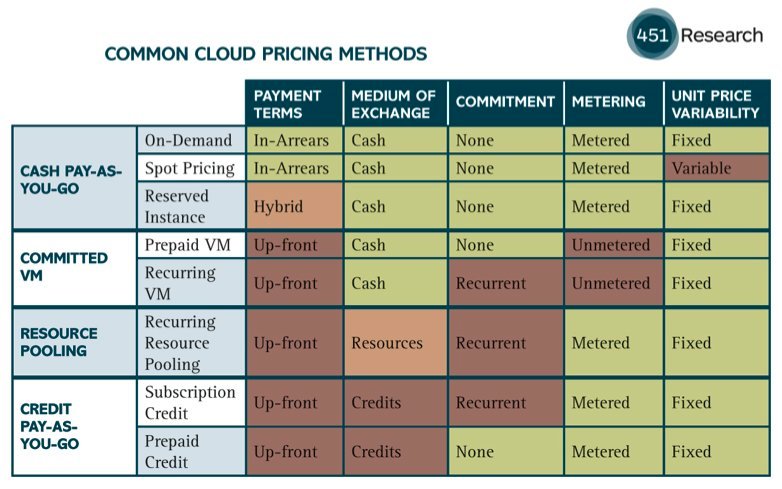 "As well as bundling different sets of resources in with their virtual machines (VMs), providers also apply different charges for additional resources, such as storage, network and security. “The consumer’s control of some of these line items is limited, and may result in unexpected charges,” the report says.

Furthermore, it notes that just 64% of providers publish their prices online, “meaning consumers have to manually engage and negotiate with over one third of providers to get a complete view of the market”.

So is there any end in sight to the confusion facing today’s buyers? The answer depends on whether providers are willing to embrace the twin goals of interoperable standards and transparent pricing.

451 senior analyst Owen Rogers believes the market will simplify pricing over time as the competing players attempt to meet customer demand for a clearer view of expenditure. “At the moment, the market is not perfectly competitive as AWS has such a large share, but increased competition is likely in the future as the likes of Microsoft, Google and others cut prices and further differentiate and publicise their offerings,” Rogers told Computer Weekly.

But broad adoption of cloud standards that allowed customers to move their workloads at will would certainly accelerate this move to clearer pricing. Rogers said: “With interoperability, providers that aim to confuse customers with new pricing methods may not be considered at all by consumers.”

In an interoperable world many cloud providers would meet spikes in demand by using other providers to handle their overspill, so easy-to-compare prices would be equally welcome for them. “They would seek the cheapest provider available to use for burst capacity, using the simplest comparison method,” said Rogers.

But since open cloud standards would enable providers to band together to take on the might of larger players, does that imply it would be in the interest of more dominant players to hold them up for as long as possible, cementing their market lead by wielding their power to lock customers in?

Rogers said: “It’s a really interesting dynamic. If one provider decided not to offer interoperable standards, but every other provider did, the lone provider would have a serious disadvantage in the market. After all, anyone who uses the lone provider knows they are stuck, but if they use the federated providers they know they can move.

"Imagine the disruption to AWS if Google and Microsoft suddenly announced they would federate their services. Interoperability is both a threat and opportunity, depending on who you are and where you see the market going.”

In the meantime, businesses are left having to do a lot of resource-hungry research if they want to get to the bottom of which cloud provider is most cost-effective for their needs. And while a pricing comparison taxonomy like that offered by 451’s Codex gives business a useful framework for making that decision, what they really want to see is concerted action by providers to move the market closer to its promise of utility computing.