In terms of satisfaction, HTC’s One X and Apple’s iPhone 5 are the UK’s favourite handsets.

In a study of 52,140 UK mobile users, carried out by On Device Research, the HTC One X topped the satisfaction table and the Apple iPhone 5 ranked second.

In the US, however, the iPhone 5 ranked fifth, lagging behind four Android devices. The Motorola Atrix ranked highest for customer satisfaction among the 93,825 US mobile users surveyed.

“Most people think the iPhone is the most innovative and interesting device out there, but our research has shown that it’s only the fifth highest ranking device in the US, where it comes after four Android devices which seem to be really innovating and providing the best experience for customers,” said Alistair Hill, co-founder of On Device Research.

Windows Phone failed to make it into the UK or US top five, but the mobile operating system did make an appearance lower down with other Android devices, according to Hill. 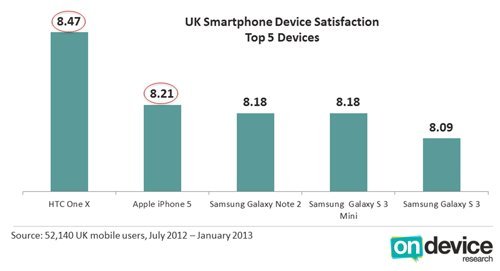 “Windows Phone 8 sees a bit of an uptake, which is great for the company, but the best devices out there at the moment are generally from Far Eastern manufacturers which have innovated on Android platforms and created fantastic hardware,” he said. 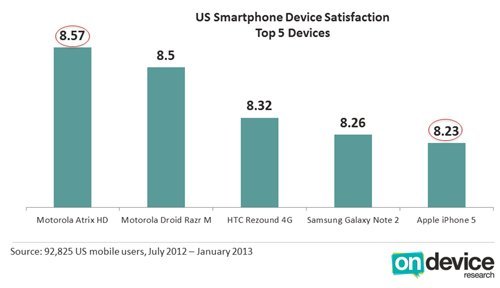 The survey found that in the UK, where there is only one 4G network operator, EE, the 4G-enabled iPhone 5 is under less pressure from competitor devices, and hence it ranked so highly.