Disaster recovery and backup for virtual servers are the two most pressing tasks in storage and backup for UK IT departments this year, according to the results of the 2013 Computer Weekly/TechTarget IT priorities survey.

Of some 400 UK IT professionals questioned, 44% said disaster recovery and business continuity was the key backup and storage project in 2013, while 41.5% cited virtual server backup as a top priority.

Those percentages are a slight increase on the same survey a year ago, when 39% ticked those options.

The third most pressing storage and backup project in 2013 is storage virtualisation, indicated by 36% of those questioned.

In fourth place is data reduction for primary storage (29%), fifth is data deduplication for backup (27%) and sixth is storage for virtual desktops (19.5%).

Implementation of cloud backup will be carried out by 18.5% of respondents this year, while installing solid state storage will be a key task this year for 18% of those questioned. Cloud storage will be implemented by 16%.

New storage projects on the agenda in 2013

The top three priorities for this year are the same as those in last year’s survey. After that, however, there are some interesting changes. 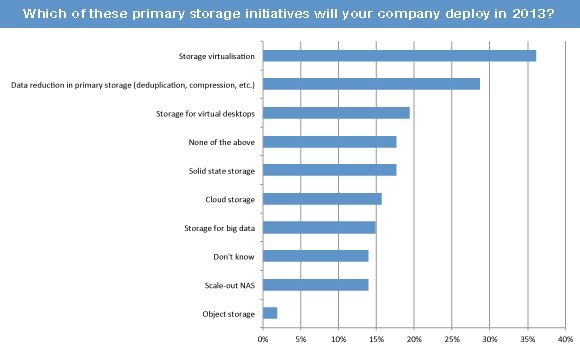 Data reduction for primary storage – such as data deduplication and compression – has become a priority for 29% respondents this year, up from 17% last year. Data deduplication for backup has also become more important, from 19% last year to 27%.

Solid state storage projects have gained pace, with the number of IT leaders planning to implement flash doubling from 9% last year. The number indicating they will engage in storage for virtual desktops projects in 2013 has risen from 12% to 19.5%.

Meanwhile, plans to move to the cloud appear to have gained pace a little. Last year, a combined figure of 21% said they planned cloud storage and backup implementations. This year, we asked about cloud storage and backup intentions separately, and received positive responses of 16% and 18.5% respectively to a question in which respondents could indicate more than one option.

Drivers for storage and backup projects

Doing more with less is still a key driver. A fifth (20%) say they are still in recession, while 37% are recovering from it. Those figures indicate a slight recovery has taken place since last year, when the equivalent percentages were 28% and 40%. 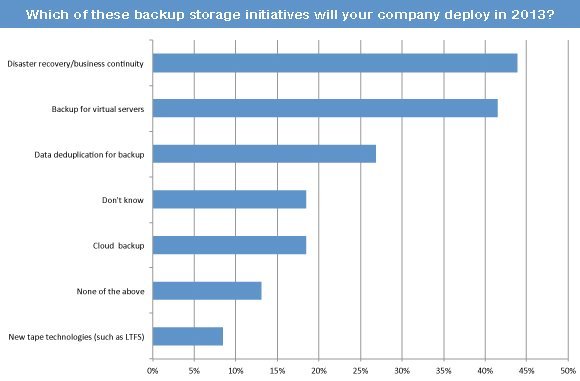 Whether due to financial constraints or simply because it is possible to get more from less with current technology, the key IT projects forming the backdrop to storage and backup this year are datacentre consolidation and the needs of legal and regulatory compliance. These were joint top IT priorities overall, each indicated by 36% of those questioned.

When asked what methods of datacentre consolidation would be employed, the chief one by far is using virtual servers (73%). This is a key driver for storage spending as virtualising servers and desktops requires IT departments to install shared storage.