Research from Forrester shows that IT and the business still face major cultural differences.

IT people feel they are doing more for the business, while business leaders do not rate IT particularly highly, according to the latest Forrester report, Business execs increase direct IT spend to support systems of engagement.

Forrester reported a difference of 25 percentage points in how the business rated IT’s ability to deliver projects on time and on budget versus how the IT executives graded that capability.

When asked about IT’s ability to innovate, R&D and marketing executives did not see IT driving innovation.

Due to the poor perception of IT within the business, Forrester noted that business users were taking direct responsibility for IT.

The analyst said that business users were frustrated with central IT and the ability to use as-a-service offerings and lower-cost technologies such as mobile to bypass IT.

The report stated, however, that across the overall sourcing lifecycle, IT still has control in most firms, "with the business exerting its highest level of influence in gathering requirements and selecting suppliers".

The research highlights a serious gap between what IT regards as value for business and what the business actually requires. To improve its standing with the business, IT sees cutting costs and improving performance as its top two priorities.

But Forrester found that the business is more focused on priorities that fuel innovation, such as investing in systems that help engage customers. 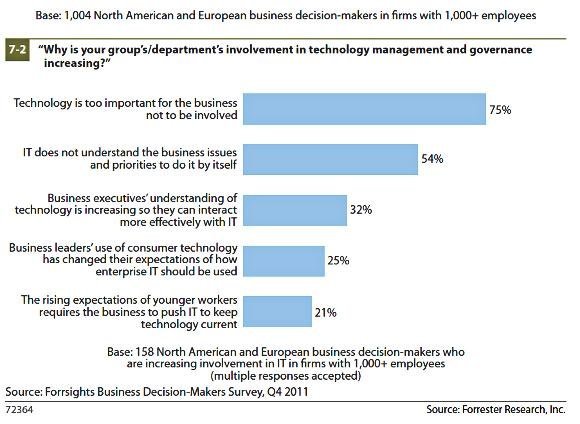 The research reflects the wider trend of IT consumerisation, where business users are empowered to use their own IT, not just laptops and smartphones, but also cloud services such as Salesforce.com.