There is a long history of users wanting, or needing, different tools to use in the workspace. Until recently, such desires have usually been expressed in terms of informal complaints and/or formal requests to IT to provide new equipment or services.

But as IT becomes more central to business operations and sophisticated IT equipment decreases in cost and becomes more widely available, IT consumerisation has become commonplace, with users taking their own equipment to work whether or not their organisation has a bring-your-own-device (BYOD) policy in place.

Research carried out by Freeform Dynamics indicates that less than half of businesses believe they have relatively little or no use of personal kit at work, while only a third encourage such actions.

The report shows that even in organisations where the use of personal devices is banned, one in five companies reports that more than a quarter of their staff use their own devices for work purposes.

The research found that the users most likely to employ personal equipment at work, whether there are policies in place restricting use or not, are typically IT professionals and senior line of business managers.

There are obvious difficulties in saying "you cannot use that" to either of these two groups. In many organisations, IT staff will do what they want anyway, maybe without telling anyone, while senior business managers will make very forceful suggestions that policies do not apply to them or that the business will suffer should they be prevented from using their chosen device.

Thus, the very recognition that privately acquired equipment is being used in business every day clearly presents organisations with challenges. 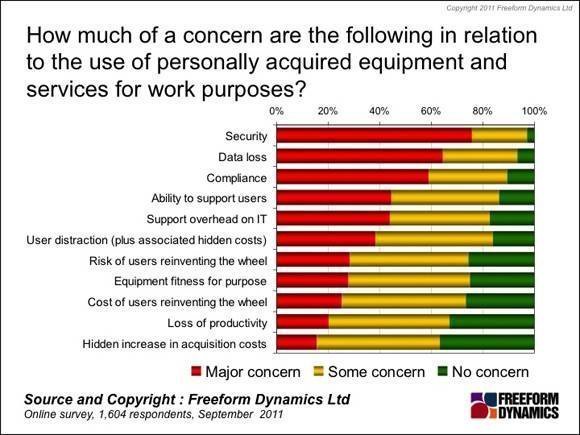 A clear majority of survey respondents said security-related issues were a major concern where personal equipment is used, followed closely by the risk of the loss of sensitive data and other compliance-related matters (see Figure 1).

In these times of increasingly heavy financial consequences for losing data or information ending up in the computer systems of competitors, these matters can be expensive and embarrassing if not tackled robustly.

But there are also more subtle worries associated with managing a potentially wide range of devices and the users attached to them. As anyone who has ever manned a helpdesk will know, supporting users is an art form at the best of times, even when they are using standard company-issued machines and software. Looking after employees' own equipment is a whole new ball game.

The range of kit that needs to be managed and supported in some way is growing, but is currently dominated by a relatively small number of devices.

Of the personal IT equipment people want to use for work, Apple iPads and iPhones, along with Android smartphones, top the list. But the Freeform Dynamics research showed that in addition to these mobile devices, Windows PCs or laptops are widely used at home, along with a growing number of Apple Macs.

Resources on IT consumerisation

If one accepts that it will prove impossible, or at least extremely problematic, to ban the use of consumer devices in business, organisations must face the challenge head-on.

A sensible way in which the potential for device proliferation can be tackled is to set policies around which device types should be allowed to access company systems and to get user acceptance that some additional management tools and processes may be imposed on the use of their machines.

But as the security issues mentioned above may require the company to have some means to remotely clean the device should it be lost, stolen or the user leave the business, the user must also be made aware of the potential consequences.

This raises the question of whether it is worthwhile to allow the use of personal equipment for business purposes. 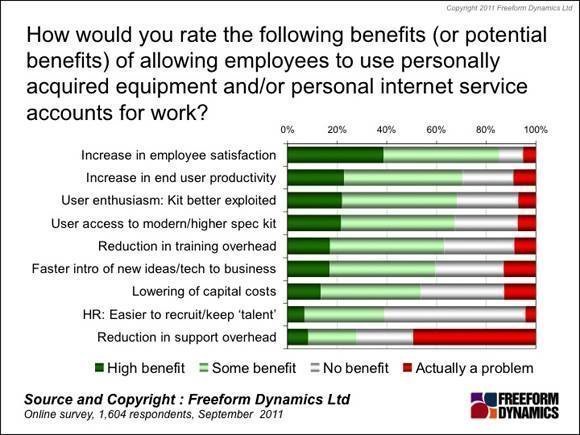 The Freeform Dynamics research found that direct cost savings on equipment expenditure do not feature highly. Instead user satisfaction and raised user productivity are expected to be most widely beneficial (see Figure 2).

But perhaps the most intriguing answer is found in the middle of the list, where over half the respondents hoped for the faster introduction of new ideas, ways of working or new technology.

The use of consumer-purchased kit in business is not a huge wave rolling over everything immediately, but it is a matter that must be addressed.

The time has come to think through how your business can tackle the matter and what policies will be required. The probability is high that new management tools and processes will be needed, combined with a workforce communications programme to make things work without overloading support staff or annoying users who feel they are being banned from moving with the times.