Dealing with the operational challenges of information security and risk management.

I’m currently escaping the bitter cold of the UK over in Abu Dhabi., where I’m spending a couple of days visiting the Reed Exhibitions regional office.

The UAE censors it’s populations’ use of the Internet. Should you accidentally stray into immoral browsing territory then your ISP will display for your benefit the following message: 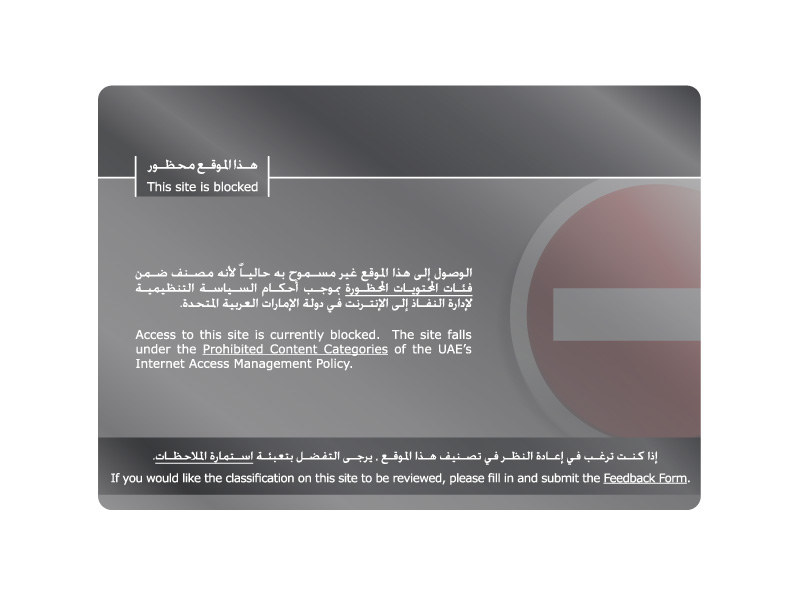 This covers online dating sites, sites where “criminal skills” might be

learnt, anything relating to drugs, pornography and gambling amongst

other things considered to be immoral or illegal. So, type the word

“site is blocked” message as shown above.

In fact, it’s no different from the censorship employed on most corporate networks. Most of us are, I’m sure, familiar with tools such as WebSense which can be used to block a similar category set and prevent employees from accessing sites deemed to be either too insecure or morally unacceptable. It’s also just as falible as the corporate controls that we use because the same message shown above is also displayed if I modify my search to “Internet gambling laws in the USA”. Change the word “gambling” to “gaming” however, and access is granted!

We tend to get very hung up on censorship in the UK. One man’s censorship is another man’s infringement of liberty. But I find myself not opposed to the UAE policy but wondering whether some well defined laws on Internet censorship should become the norm rather than the exception. Would it make use of the Internet safer? In other words, if hacker sites and phishing sites were blocked by the ISP then would the number of people falling victim to malware drop?

There’s an interesting report from the House of Commons Select Committee on Culture, Media, and Sport which discusses the need to “control children’s access to potentially

harmful content on the Internet, and to take action to prevent

exposure to illegal content.” More to the point, the major ISPs in the UK already block access to websites listed by the IWF as hosting illegal content. So, in fact censorship of the web is already at an advanced stage in the UK, just not so overtly as in the UAE. Interestingly, the word “censor” is not actually used anywhere in the government report. Censored out perhaps?

The objections that do get voiced are mostly from those who object of the lack of transparency (one of many such voices here) and legal framework. So should Internet censorship in the UK be more overt such as that in the UAE?