As we are celebrating 20 years of Linux this week, it seems only fitting to highlight a few milestones in the life of what has come to be (for many people) a very important piece of software development.

This link will take you to some collected notes, which dig right back to the dawn of Linux history on the 31st of July 1992 when Linus Torvalds was discussing his ideas on an open newsgroup.

Torvalds wrote at the time, “I’m doing a (free) operating system (just a hobby, won’t be big and professional like gnu) for 386(486) AT clones. This has been brewing since April and is starting to get ready. I’d like any feedback on things people like/dislike in minix, as my OS resembles it somewhat (same physical layout of the file-system (due to practical reasons) among other things).”

It took Torvalds around two months from that moment until the point when he actually had something working.

On the 19th of December that year he wrote, ” Linux is still in beta (although available for brave souls by ftp), and has reached the version 0.11. It’s still not as comprehensive as 386-minix, but better in some respects.”

He finishes these notes (there are 4214 words in all if you wish to dive deep) by saying that so far, “Reactions have been mostly very positive, and you do learn a lot doing this type of thing (on the other hand, your studies suffer in other respects :)”

To view the below InfoGraphic thumbnail in full size and read up more on the 20th Anniversary of Linux then visit the Linux Foundation‘s web site where you can watch Linux videos and take a quiz to see whether you could do Linus Torvalds’ job. 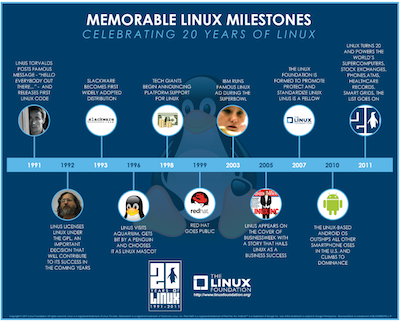