British prime minister described himself recently as leader of the ‘aspiration nation’ in line with his wider calls for entrepreneurship and startup business generation.

Cameron said that last year in 2011, the rate of new business creation was faster than at any other time in our nation’s history.

Whether you ascribe to Cameron’s party values or not, this is (if the figures are real and true) encouraging news. 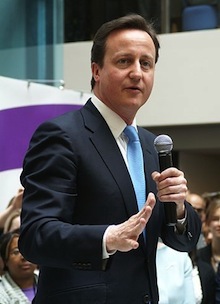 With this in mind, can we draw parallels to open source?

An IT commentary piece was posted over the weekend describing open source technology as our route to surviving the apocalypse.

This might be overstating it slightly, but of the reasoning listed in this piece we can highlight the following aspects of open technologies:

Open source is democratic; it is by the people, for the people and of the people.

Open source is characterised by an absence of big business – it is, if you like, the freelance entrepreneur antithesis to the proprietary behemoths.

Open source is DIY; and this is a skill closely linked to “can do” startup entrepreneurship.

So which technology companies did Cameron reference is his speech (link is above) and were they real open source champions?

Well, Intel and Cisco got an immediate name check, Google was in too I suppose.

Come on Mr Cameron, install Linux on parliamentary laptops and then we’ll be impressed.