While the particle physicist, computer science and computational physics communities are all comparatively adept when it comes to juggling command line level code operation, the same skills do not typically translate over to the men in white coats tasked with looking after comparative genomics research.

NOTE: news-medical.net defines Genomics as: the study of the genomes of organisms — the field includes efforts to determine the entire deoxyribonucleic acid (DNA) sequence of organisms and fine-scale genetic mapping efforts. The human biological data contained in a genome is encoded in its DNA structures, which is then subdivided into ‘discrete units’ called genes.

Scientists at Murdoch University set out to build Yabi to simplify access to supercomputing infrastructures for end users. 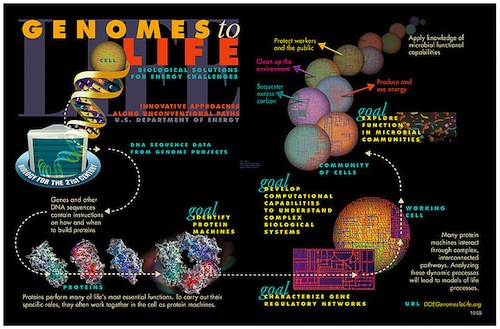 “Yabi has radically transformed the way we process and analyse 2nd generation DNA sequence data. Through a user-friendly dynamic HTML interface we can design a simple pipeline that sorts, trims and queries sequence data against databases — we put raw data in one end and obtain meaningful outputs at the end of the pipeline. Put simply, Yabi has enabled us to spend more time analysing the actual data and less time ‘fighting’ it,” said Dr Michael Bunce, ARC Future Fellow, Ancient DNA Lab, School of Biological Sciences and Biotechnology, Murdoch University.

China-based BGI has combined automated pipeline analysis with software and tools to be integrated with the industry’s largest sequencing platform. The intention is to provide information for biologists, bioinformaticists and physicians to submit and receive an automated analysis of DNA sequencing data.

The question remains — how many bioinformaticists, particle physicists and computational physics specialists does it take to change a light bulb?