The latest research from KPMG reveals the changing reasons why businesses outsource their IT?

In its 2012 UK Service Provider Performance and Satisfaction study, KPMG found that over the last year 70% of businesses are influenced by cost when making their outsourcing decisions compared to 83% in 2010 and 81% in 2009.

I touched in this recently in an article but I now have all the stats on the reasons people outsource IT.

Now I have the full details which are in the graph below. Financial flexibility as a reason to outsource is an interesting one in the graph. It leaped in importance in 2010 and then back down to 2009 levels in 2012.

Here is the KPMG graph giving the drivers of IT outsourcing. 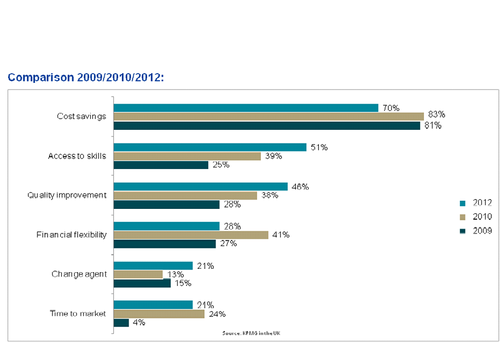 So why did you outsource your IT? Pleas fill in this questionnaire?