I’m going to tell you a true story about voice recognition, and how far we still have to go before it really works properly.

If you own a Samsung Smart TV and have enabled its voice recognition feature, you may want to consider switching it off, because someone has finally read the privacy policy that you just ticked without looking at, and has found that it allows your television to record and transmit your voice to third party services that provide the voice recognition features on Smart TVs.

In the Ts&Cs, Samsung says:

“Please be aware that if your spoken words include personal or other sensitive information, that information will be among the data captured and transmitted to a third party through your use of Voice Recognition.”

This brings up all sorts of concerns about data protection and privacy, and inevitably my thoughts are drawn to dystopian futures set down in books like 1984 or Brave New World.

Are our devices spying on us? Well, yes, very probably they are.

But I actually turned off voice recognition on my Smart TV some time ago, and it wasn’t because I thought my TV was spying on me.

That story in full 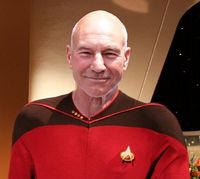 So, one evening I flopped down in front of the TV with a beer and after zapping through the channels, settled on on old episode of Star Trek: The Next Generation. It had been on for about five minutes.

I forget what, exactly was happening on the show, but what happened next in my living room was a little too close to the technological singularity for my taste.

If you own a Samsung Smart TV, you might know how its voice recognition feature is activated. You simply say, loudly and clearly “hello, TV” or words to that effect. Then a little menu pops up to ask you what you want to do next: you can get it to change the channel, or go to the Smart Hub or app store, it’s all still pretty simple stuff.

So there I was, watching Star Trek, and, let’s be clear, I had said absolutely nothing to my TV, when Captain Picard swept onto the bridge and intoned the words “Hello, computer!”

And up popped the voice menu. What had happened was that, because I use external speakers and not the in-built Samsung ones, the TV’s microphone had picked up sound that it shouldn’t have picked up.

I mean, I was honoured, obviously. Who wouldn’t be? (Love you, Pat!)

But if the truth be told, I was also a little scared. If it responded to Captain Picard, might it respond to Data as well? Just to be on the safe side, I would probably have to stop watching Buffy too, in case Giles said anything authoritative sounding. And of course, anything with Sir Ian McKellen in was right out…. Imagine if I’d been watching an X-Men Blu-Ray? My TV would have exploded during their scenes.

So I deactivated the voice recognition features straight away, and ever since then my life has been less fraught and my personal data secure. Yeah, I’ll stick with the remote control thanks, Samsung.

Of course, the only thing that now has me slightly worried following the revelation of the security hole, is that Samsung may have recorded me opening a hailing channel to the Romulan High Command.

Which I think might be a breach of several Starfleet protocols.