The, erm, gripping legal battle between Samsung and Apple has taken a new twist. The Galaxy S II creator is planning to use Kubrick’s renowned 2001:A Space Odyssey to try and prove that Apple is not the originator of the tablet computer.

The film, which is over 40 years’ old, features a tablet-like device and Samsung is using this as a ‘prior-art’ defense.

This means that if Samsung’s claims are taken seriously as firm evidence, proving that the idea existed before Apple’s patent, then Steve Jobs could see his corporation’s patent deemed invalid.

Apple must have been expecting some form of retaliation, albeit probably not classic film related, from Samsung after gaining an injunction that prohibited the Korean firm from selling its Galaxy 10.1 Tablet in Europe. This has since been overturned and now Samsung is fighting back, sci-fi style. 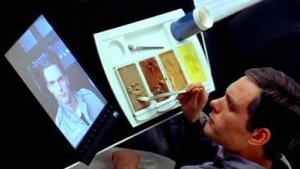