It’s almost inevitable isn’t it that the credit crunch, which most commentators believe hasn’t really hit the IT industry, will impact the IT departments of businesses at some point? 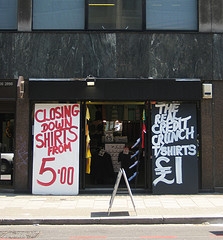 Despite the argument that IT is now so integral to a businesses success that cutting it, would be, well like cutting your nose off to spite your face, there can be no doubting that both consumers and businesses are feeling the pinch. I was talking to a city banker at the weekend, who works for one of the big multinational banks, who said that yes the situation was bad, but wasn’t quite as bad as the media were making out to be. However, despite this glimmer of hope there can be no doubting how large the impact is. I think this set of graphs and graphics pulled together by the BBC portray the situation clearly.

With all this in mind it is surely only a matter of time before a worsening situation in the global  economy feeds through to impact on IT. One big supplier recently told me that their clients were being “cautious” about future spend and you have to think “understandably so”.

So is leading analyst Richard Holway right in his belief that IT will catch its cold in 2009. Take a listen to our podcast interview with Richard Holway and let us know your thoughts?