Intel’s news this week has been dominated by the company’s work with Google to optimise future releases of the Android platform for Intel’s family of low power Atom processors.

Coinciding with the Intel Developer Forum which ran this week in San Francisco, the chip maker has clearly been happy to lay its open source credentials out here. As CEO Paul Otellini puts it, he wants to grow Intel’s business in adjacent computing market segments… i.e. smartphones on open platforms in this case.

So when Intel makes big announcements (especially software related ones) and you want the software developer/programmer line, it is worth Googling James Reinders who is a multi-core evangelist and Intel’s director of software products.

Reinders used his Intel Developer Forum blog post as a chance to highlight the fact that CERN’s Large Hadron Collider is built with support from Intel’s MIC (Many Integrated Core) technology to run extreme computing programs which help process results from the collider itself. 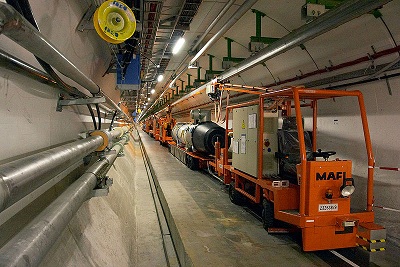 Not to detract from the jolly nice Google-related news which is already out there in the ether, I think Reinder’s opening blog comment is excitingly geeky in all the right ways…

“In Justin Rattner’s keynote this morning at IDF, we got to see another example of how we make programs, for multicore processors, run on many-core processors. Andrzej Nowak from CERN openlab demonstrated “Track Fitter,” on a Intel MIC software development platform, which looks for tracks of particles in the data from a particle detector. This online processing near the detectors on the Large Hadron Collider uses advanced algorithms to determine what the real data from the detectors means. The code scales well on multicore processors and it scales well on our Intel MIC software development platform (which we call Knights Ferry). The code demonstrated required no source code changes in moving from running on multicore systems to running on a many-core system. These results by the team at CERN openlab using our tools, show very well how our investments in helping software development stay clear of detours.”

Reinders’ “detour” comment relates to his piece’s title “Extreme computing is a journey, not a detour.” A comment that in and of itself resonates with Otellini’s “computing is a process of constant change” message – and of course’s Andy Grove’s ‘Strategic Inflexion Points’ concept in his wonderful book Only The Paranoid survive.