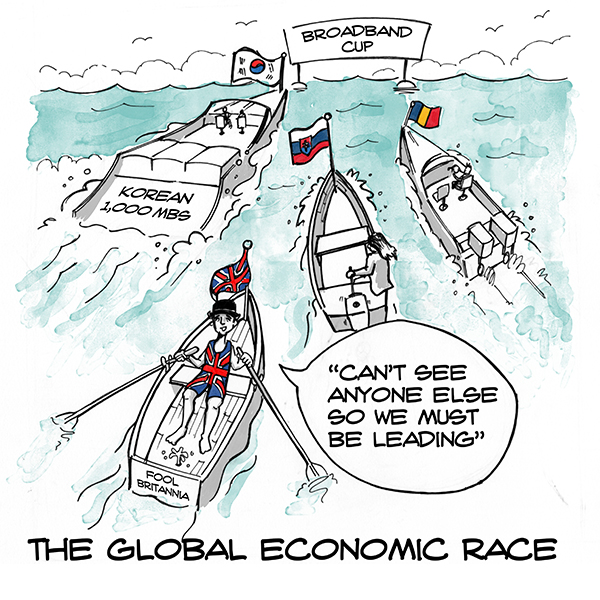 The original definition of broadband was the bandwidth necessary to deliver broadcast quality video to the home by 2002. It was redefined to mean “always on internet” when the Labour Government introduced “Local Loop Unbundling” to protect the US bondholders of NTL and Telewest from taking a haircut – because their fibre roll-out had fallen so far behind that of BT. Lord Carter said that was one of his finest achievements. As a lobbyist it was. But it nearly bankrupted BT, destroying its business strategy and leaving it massively overstretched, so that only now, with over a £billion of state aid, is it approaching where it had planned to be in 2002.

Meanwhile the rest of the world has moved on.

Last Monday the Digital Policy Alliance organised a Parliamentary Briefing in co-operation with the European Internet Foundation and Digital Business First (who I thank for use of the carton above) on the theme of Mobile and Broadband: what your Constituents would like to know

That meeting was notable for the juxtaposition of alternative realities and visions of the future. The contrast betwen the EIF Vision of the future, “The Digital World in 2030” and the current UK position as seen by Digital Business First in their report “Britain’s enduring Broadband Deficit: A divided nation – time for an effective plan” could not be more marked. I was also reminded of my personal reaction to a previous exercise on “The Digital World in 2025“.

Amidst claims from Ofcom, DCMS and Cabinet Office that the UK is powering ahead into a world of Digital by Default, one of my regular contributors drew my attention to the press release for last years’ Oxford Internet Institute survey “More than half of the British people who use the Internet do so without enthusiasm“.  Perhaps they share the views of a speaker at a security event yesterday who said that the only certain prediction is that within five years something will cause the US-Centric Internet to go down for three or four days and you should not be caught out when it does. I suspect that sooner or later the sheep will begin jumping the walls and try more seriously to escape the world of ubiquitous on-line surveillance and cyberfraud into a world of off-line, tax free barter. I am delighted to note that Microsoft has recognised the danger and announced a fundamental change of policy in the light of the reaction of publicity for its monitoring of e-mails.

Since 1977 when I left ICL to join the Wellcome Foundation as a corporate planner I have always looked as technology from the perspective of the victims, alias users. At Wellcome I had to try to get reliable service from suppliers, including telcos, around the world, including those seeking to sell us supposedly seamless global services. Then as Technology Assessment Services Manager at the National Computing Centre I had responsibility for “End User” computing, including the Microsystems Centre and the attempts to provide realistic  guidance to SMEs,

Why are the British so unenthusiastic about the Internet while they are among its biggest users?

Why are IT suppliers, including Telcos and ISPs, so reluctant to listen to their customers?

The answer may be found in industry reactions to the current Which campaign on broadband speeds  The suppliers appear united in the view that those who complain are ignorant muppets who do not understand, appreciate or properly use the services they have been sold.  There appears to be little or no attempt to measure what they actually receive – at the end of a supply chain of websites and servers, tranmission lines, routers, PCs, operating systems, browsers, security and applications software.

Is the poor user experience because they are on cheap, unbundled and overloaded crapband, circuits that are delivering well below the claimed performance?  Is it because they are on elderly and slow PCs with limited storage? Or is it because they have listened to all the security and keep their operating systems, browsers and filters bang up to date so that these spend their time arguing with the surveillance bloatware that is inserted whenever the users visits an advertising funded website?

Menawhile the pace of market change is beginning to acclerate. Amazon is invading the video streaming market . Google is invading the Cloud. BT wifi has invaded the mobile markets. Huawei is about to show the West how a 4G Mesh can transform a community. And so on.

But is it growth or churn?

Are the major players (from Amazon, Apple and BT, through Google, Microsoft and Netflix to Sky, Virgin and Vodafone) competing for static (or even falling) household spend on a mix of communications and content (including fixed line, mobile and entertainment subscriptions and pay as you go)? Is their “growth” merely a transfer of advertising spend from traditional media? Will the off-shore download market survive the imposition of VAT in the budget?

And what about the needs of  UK business for seamless connectivity if they are to remain globally competitive?

Nations whose Digital Policy is other than “pull your regulatory finger out and allow the markets to drive” appear set to be left behind when we are taken unawares by new players who have taken a cool look at what paying customers actually want, instead of asking investors to fund more of the same. I have regulatory blogged on the need to allow market forces to compensate for regulatory failure – with officials focussing their efforts on actual abuse, including anti-competitive behaviour, particularly that against smaller players, new entrants and innovators. This is now urgent. If we do not act soon we will remain, as we have become, a latter day Cannery Row, surfing the cybercrud. It is no accident that the UK, which spends more on-line than the rest of Europe, has the lowest indigenous market share and biggest problems with abuse over off-shore services.

The good news is that, in the wake of the crumbling of confidence in US-based operations, we are seeing players like Google, HP and IBM moving data centres as well as development staff to the UK. In looking at forward policy we need to build on that opportunity and ensure that our on-line balance of trade in services becomes as healthy as that in off-line services,

That means a more constructive and “nuanced” set of policies than is currently under debate, so that the UK becomes the global location of choice for trusted on-line services. That cannot happen unless we have reliable, secure and resilient broadband that is fit for purpose, serving locations where those who could be based anywhere in the world would like to live.

Hence the reason that opening the way to allow market forces to expedite the replacement of  copper “crapband” by ubiquitous high speed, world class, continuously evolving mesh infrastructures has to be at the heart of the forward digital policy of who-ever hopes to win the next general election. If it is at the heart of both Conservative and Labour policies, (just as Telecoms Liberalisation was built into both Conservative and Labour policies during the run up to the 1979 election), then perhaps we can give investors the confidence to bring the necessary implementation forward.

On Monday I am due to stand down as Chairman of the Conservative  Technology Forum, although I hope to continue as Vice Chairman in charge of policy studies. I will be making this point in my report and hope to have it included in my terms of reference going forward. Obviously we will be going for “thought leadership”, but leadership is of little value if others do not follow. And if they are fleeter of foot … .