Nick Clegg announced plans for the ‘Your Freedom’ programme today. A plan to allow British citizens the freedom to repeal useless legislation and red tape.

You might ask why this would be of interest to me – or why on earth you should be interested in some new government initiative as you scan the pages of Computer Weekly? Two reasons, crowdsourcing and open source.
This initiative is essentially trying to create a government suggestion box. Citizens suggest laws that should be repealed, or other ways to improve the way government works. If the suggestion builds up a head of steam and becomes popular then it will be reviewed by the Cabinet Office and directed to someone in government who might be able to action the most credible suggestions.
I asked Nick Clegg directly how the crowdsourcing element of this is going to run. I wasn’t asking a technical question, I just wanted to understand the strategy, and he just told me that the Cabinet Office is running the website.
So I asked some members of the Cabinet Office team about the software being used. They were not techies and said I could come in to have a poke around at a future date, but they did suggest that the site has been put together at a very low cost using modular tools that can be easily bolted together. It’s nice to see the government embracing the fact that software can be good *and* low cost these days.
I had expected the site to run a little like a YouTube of ideas, allowing popular ideas to bubble to the top for consideration. However, the Cabinet Office team insisted that all ideas will be reviewed and even an unpopular idea could be directed to a team for action – it might be around a complex piece of legislation that is hard to define, and in any case if this was just about populism then the top ideas might be an exit from Europe, no more wars, and the death penalty for anything worse than petty crime.
I am interested in going to see how this works in more detail because there are a number of false starts that could trip up an initiative like this, but on the surface it’s a great idea. 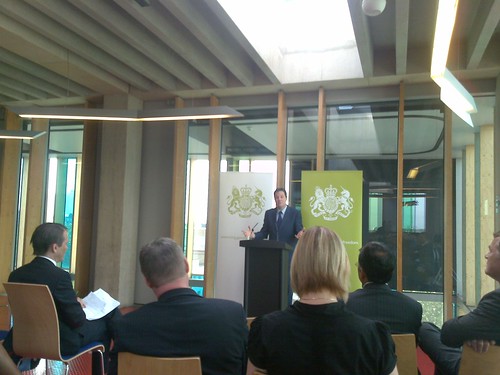