Twitter has added an additional dimension to TV shows for some time. The BBC political debate ‘Question Time’ has a furiously active Twitter debate always running live whenever it’s broadcast and the big competition shows such as X-Factor and Strictly Come Dancing all encourage a lot of online debate and argument.

But I’ve never noticed a broadcaster embracing this online chatter to the extent that the very first thing on screen is a hashtag. And a hashtag with no explanation of what it is, meaning that when the BBC started broadcasting episode 1 of series 40 of ‘Have I got news for you’ with ‘#bbcHIGNFY’ on screen as the show started, they expected their audience to understand – and follow.
I think that’s quite a watershed moment for the BBC and for broadcasting in general. In fact, the very term broadcasting starts to become redundant when the broadcast is only one component of the entire entertainment experience.
This reminds me of when I visited New York in 1996 and saw advertising posters featuring URLs and email addresses. Back home in London it was still uncommon to have an email address on your company business card, let alone to be flaunting a web address on posters in the street. That all changed, and fast.
The ‘golden era’ of television was always social, because there was a lack of choice. Everyone watched the latest big game show or drama at the same time, and talked about it the next day in school or at work. Multi-channel TV started to erode this social discourse around shows, and yet perversely we are now entering an era where shows are not only discussed more than ever, but discussed in real-time to the extent that the discussion becomes a part of the viewing experience.
It might seem frivolous to be concerned about how people are watching the X-Factor. I know I personally have better things to do than watching a bunch of hopefuls attempt to fast-track their way into the music business, but this socialised and connected TV experience fundamentally changes the business model for shows, broadcasters, and advertisers, and affects many other areas of media, including music and publishing.
Simon Cowell is probably already aware of this and plotting a new media empire that will dwarf the traditional media giants we have grown to love over decades. Don’t bet against it, and if you do, make sure you are betting on a social platform so your friends can bet against you… 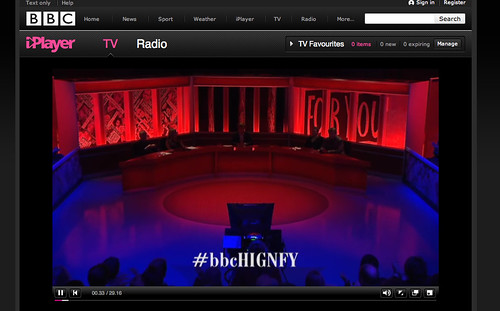