Have you been to an event recently featuring a tweetwall? This is a big screen tuned into the hashtag for the event, so people can tweet and see their messages displayed for everyone at the event to see.

I’ve tried arranging this myself at a few events, but mostly I have been disappointed. It’s obvious at a social media gathering that everyone will use Twitter, but at regular IT events, especially IT management, it’s unusual to get anyone tweeting.
So I was impressed by the results of the experiment by the British Computer Society last night at their annual UK IT Industry awards. Even though these awards were co-hosted by Computer Weekly’s rival magazine, Computing, I was there because I was a judge for the awards.
The BCS installed three immense tweetwalls, the biggest flat-screen displays I have ever seen, and all displaying the latest tweets on the event. What was really interesting though was how busy they were and how it created a real buzz about the event… the people at our table were often talking together about some of the comments on the tweetwall.
I was seated close to BCS Deputy CEO Ian Ryder, and he explained to me that they had been nervous about the idea of the tweetwall. It’s only natural at a prestigious event featuring a couple of thousand people – to have entirely open access to the display, plus a lot of free alcohol, could be a recipe for disaster. But credit to the tweeters at the event, nobody abused the system.
Naturally enough, Computer Weekly made a play to take over the wall. You can see from the photo that I was the top tweeter, followed by Angelica Mari, and I noticed some tweets popping up from Bryan Glick… and he was not even there, but he was reminding the elite of the IT community that as the Computing journalists would all be hungover today, it’s a good day to turn to computerweekly.com!
I expect to see a lot more tweetwalls at events soon. 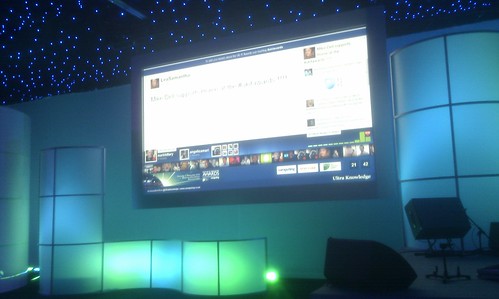