Latest Blog Posts
Related Content
BlogRoll
Latest News
Download Computer Weekly
A hot trending topic on Twitter today – The Times paywall is broken! The content of the newspaper is all online and free – go and lap it up!
The Times paywall is one of the most contentious subjects in British print media. Advocates of the Murdoch press believe that branded media products, such as The Times, must charge for their content and cannot afford to simply distribute it for free online. The opposing view, with supporters such as Alan Rusbridger of The Guardian, believe that you must spread some content for free because links, recommendations, and debate cannot happen if comment is behind a paywall. How do you recommend an article on Twitter if you know 99.9% of people on Twitter can’t click on the link to read the article?
As any watcher of British media knows, The Times is having a hard time claiming any success from their paywall experiment. Talk of six-figure subscribers is blurred by the lack of transparency over subscribers being active for a single day, or being genuine long-term subscribers.
Of course, many in the media say that you can’t judge Rupert Murdoch on a single experiment in online payment for news content, and it is a fact that news organisations need to be funded somehow, but the bottom line is that nobody I know reads The Times anymore because of the paywall. Nobody reads it. Nobody recommends their stories. Nobody sends out links to the opinion pieces by Times columnists because hardly anyone bothers to subscribe to the online version of the paper.
And now I have lost the habit of taking a look at The Times to see what they say (once upon a time I used to get the print version everyday) I can’t even be bothered to take a look when the online version is free. It’s apparently an error, a problem with the paywall, but I suspect those naughty Public Relations consultants have had a hand in it… leaking messages to Twitter advising the public to take a quick look at the paper ‘while you can!’
So, In response to all the Twitter messages urging me to take a peek while I can, all I can offer is a very jaded yawn. 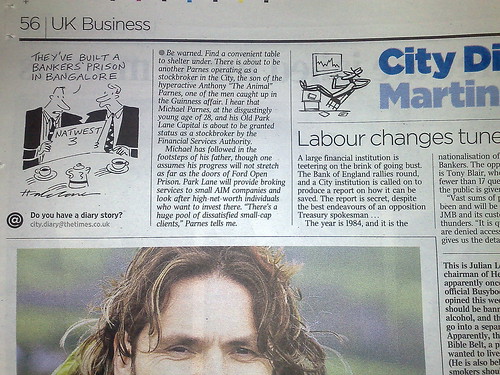