Latest Blog Posts
Related Content
BlogRoll
Latest News
Download Computer Weekly
In most cities it’s a time of joy when the local mayor or council extends the public metro system. It becomes easier for residents to travel within their own city and it can change and positively improve neighbourhoods.
Just look at the development of Brixton or Stratford in London, arguably no-go zones prior to being hooked up to the London Underground, for proof.
But what about the rich areas of a city that don’t need to be hauled into the middle-class – they would rather keep the middle-class (and poor) out?
This is the problem facing São Paulo in Brazil today and an incredible social protest has been sparked on Facebook because of it.
An entirely new Metro line has been planned for some time and details can even be seen in English on Wikipedia here. But it passes through Higienópolis – a very smart area of the city and this is what has caused outrage amongst local residents.
The locals have protested that “a different type of people” will visit their part of the city if public transport is improved. Even worse, there might be snack vendors in the street serving food to hungry commuters.
It sounds bizarre, yet their reverse-class-war protest has resulted in the planned station being scrapped. The thousands of students who study at nearby MacKenzie university will not be pleased to hear that they need to continue using the more unreliable bus service.
And just as the news about the station filtered out into the social networks today, a local journalist, Danilo Saraiva, created a Facebook event and invited his friends, who then invited their friends. The event is a BBQ on Saturday outside the main shopping centre in Higienópolis – the kind of shopping centre where even the pet dogs wear Prada. 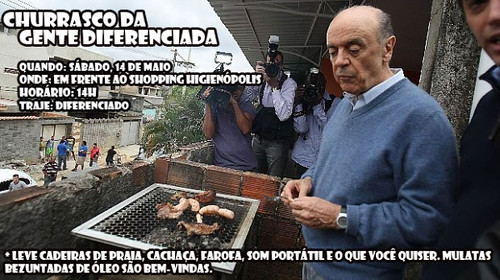 Guests are advised to bring a boom box so they can play loud music in the street – presumably no Mozart is allowed – and plenty of pets and meat for the BBQ.
It’s all good fun. A social protest against the vague and opaque decisions of town planners who have spiked a much-needed station entirely because of local NIMBYs.
But when I started writing this article, there were nearly 2,000 people attending the BBQ. As I write this line there are 5,000 attending. And this article is not very long…
This BBQ has the potential to explode and go viral… perhaps showing the residents of Higienópolis that there are a lot more of us than there are of them.
Perhaps the governor of São Paulo should listen to Canadian media expert Don Tapscott – author of Macrowikinomics – because Don’s book lucidly describes how governments will interact with the people in future though more open and transparent communication channels. The same people who elect them.
All over the world, politics has gone social. Now which neighbourhood does the governor himself live in?
SearchCIO
SearchSecurity
SearchNetworking
SearchDataCenter
SearchDataManagement
Close