Latest Blog Posts
Related Content
BlogRoll
Latest News
Download Computer Weekly
Evan Williams, CEO of Twitter, has stepped down to focus on product strategy. The present COO, Dick Costolo, will replace him as CEO.
Here is what Evan Williams said on his blog yesterday:  “The challenges of growing an organization so quickly are numerous. Growing big is not success, in itself. Success to us means meeting our potential as a profitable company that can retain its culture and user focus while having a positive impact on the world. This is no small task. I frequently reflect on the type of focus that is required from everyone at Twitter to get us there.”
Williams plans to figure out how to make money from Twitter, because although it has 165m users updating the site 90m times a day, the actual revenue model is very weak. They recently started the first move towards monetisation with the corporate accounts, but that’s really only a baby step to where they could be.
As I mentioned on this blog yesterday, Twitter has bloomed into a powerful device allowing a business user to dive into conversations taking place in realtime about the industry his company works in. The sheer scale of the system and the growing support for it means that Twitter is the home of the zeitgeist. Google may try sucking Twitter feeds into their search engine, which is a great improvement, but to really engage with what people are talking about online right now, you need to be inside Twitter.
It’s clear that this has already been of immense interest to advertisers, public relations firms, marketing advisors, and the media. But though every TV programme now has a Twitter channel, the founders of the site are making nothing from all that interaction.
So I think it’s a good move for Williams to step down, allowing time to think. Twitter is the next Google as Google was the next Microsoft. It’s more than a website or social network and it’s quite different to the networking facilitated by Facebook. With Twitter you engage in conversation, friend or not.
There’s gold in those tweets and now it’s up to Williams to find it. 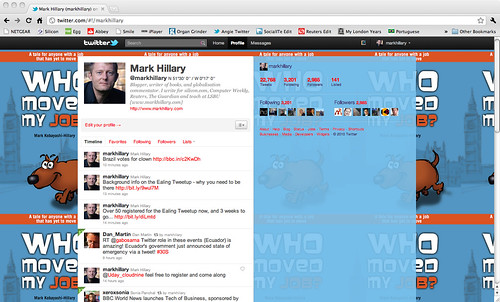