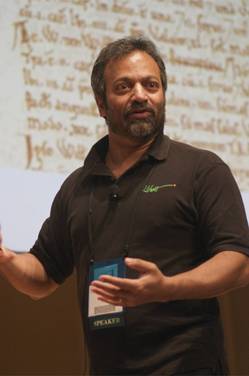 As  Lee pointed out in a comment, the one frustration with this expo is that it’s been long on the idea that Web 2.0 is important to enterprise, but rather short on actual detail.

JP Rangaswami of BT Design went a little bit further in that direction, by outlining how social tools can usefully become part of our working practices – and even build on some of the existing ones.

Social tools enavble the communities within businesses to emerge. There are fewer figures of authority and it’s more a peer space than the traditional heirarchial business.

Young people today are going to come into the workplace used to pervasive. mobile communications and they’re not going to be impressed with the static, lock-down worsktations we have now.

“They’re pre-trained not to think as stupidly as previous generations,” said JP.

And you only get proper levels of productivity by loosening you grip on these tools. Instant messenging can be important because it’s one of the few forms of communication where it’s polite to be silent. “Are you still there?” has become part of the language of phones because mobiles drop connections. In IM it’s not necessary, because there’s a status, allowing you to see if people are online or not, or if they’re busy, or away from their computers. In this context, e-mail has almost become snail mail – people become irritated if you don’t reply.

So, public indications of what you’re doing is useful. But in most companies, Outlook rules our lives, and it can tell you that the best time for this group of people to meet is this date. But it doesn’t share or advertise that information beyond that group.

Compare that to Twitter where you can have a person to person conversation using the @username protocol, but it’s in public. You can take it private if you want, through direct mesages, but the conversation is still captured in a useful form.

This isn’t particualrly new – there have been forms of an activity stream or newsfeed since 2006 at least. But using these activity streams for aggregation of community activity is valuable. If you can share that data maongst working teams – or communities –  you gain the benefits of the network effect.


Who owns this data? That’s a key question in a data-driven world.

within a company, drawing together shouldn’t be complicated – there’s

no rocket science in Facebook, for example. It’s built of pre-existing

elements whose technological basis is well-known.

step is to think about the company directory. “I’ve never worked in a

company that didn’t have a director,” he said. “Groupings have existed

since the year dot.” company directories have gone from being

hand-created to electronically created, and can become living tools,

with the right amount of metadata…

At the basis of the idea of

using social tools in the enterprise is the notion that communication

can be captured as a persistent archive, tagged with rich metadata and

“If we make everything we say a data object, and we can share and move it around,” he says. “It becomes valuable.”

if I understood what JP was saying, imagine taking the sort of data you

get in your Facebook newsfeed, and seeing it for work – the meetings

people are arranging, the conversations they’re having the places

you’re going. “Embedding that into my workflow is what makes it

I missed the first 15 minutes of this session, so I’ve used material

from tweets by Nancy, Ronna and Steph to reconstruct some of what I